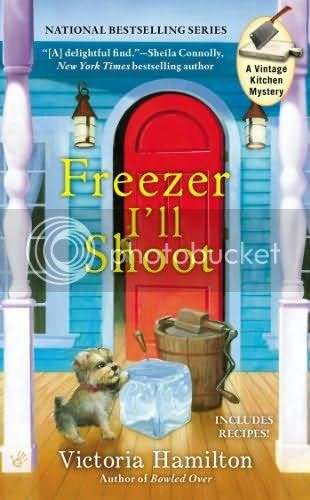 ICE COLD
Trying to escape her overbearing mother, vintage kitchenware enthusiast and soon-to-be columnist Jaymie Leighton retreats to her family's cottage on Heartbreak Island. While there she hopes to write an article about the Ice House restaurant, owned by good friends and neighbors, siblings Ruby and Garnet Redmond. Once an actual icehouse, the restaurant is charmingly decorated with antique tools of the trade, including a collection of ice picks.
One night, while working on her article, Jaymie overhears an argument and, ever the sleuth, sets out to explore. But when she stumbles upon a dead body her blood runs cold. It's Urban Dobrinskie, whose feud with the Redmonds is no secret, and he's got an ice pick through his heart. Now Jaymie's got to sharpen her sleuthing skills to chip away at the mystery and prove her neighbors' innocence—before someone else gets picked off…


Jaymie’s parents are in town and Jaymie is very happy that she and her little three-legged dog Hoppy can escape her own home to the family cottage on Heartbreak Island. She is the usual caretaker, but this time the whole septic system needs to be redone. She really loves her mother, but she also drives her crazy. Her mother totally does not understand her love for vintage cook ware and thinks it all junk that needs to be thrown out. She also does not think that Jaymie is really working hard in four different jobs, but thinks she is still just goofing around a bit. But Jaymie is serious about becoming a vintage cookbook author, and for that, she needs some more writing experience first. The local paper is interested in her becoming a columnist, for free at first, but finding a suitable topic proves to be more difficult than Jaymie thought.
And that is not all, her almost boyfriend Daniel, who wants much more than what Jaymie is ready for, wants to have dinner with his and her parents, and for all of them to get to know each other. And the two moms really dislike each other, putting Jaymie square in the middle. So hiding out on the island is a welcome relief for Jaymie.

Redoing the septic system also means no running water in the cottage, and Jaymie is very happy that her neighbours have freely offered her the use of their bathroom, both in the house and in their restaurant. Jaymie really likes Ruby and Garnet Redmond, who have moved to the island some seven years ago, and operate a really successful restaurant. So when she discovers a dead body on their property border, she cannot believe that one of them is guilty. Her secret crush, police officer Zack Christian is also living on the island, and he is heading the investigation. Having shared a table at the restaurant the other night, due to the crush, makes it mandatory to have his boss step in to interrogate her though. Zack has had some bad history with a former witness/possible suspect, which is why he is now in Queensville instead of the big city.

Jaymie can’t help but investigate some things as well, there are certainly more suspects than just her neighbours.


I really enjoyed this third book in the series. Jaymie is an interesting character, she seems easygoing and willing to help wherever she can, but she is also careful and a bit hesitant to rush into a relationship with Daniel. Everyone keeps telling her what a catch he is, being a self made multimillionaire, but she does not really know much about him. She really likes Daniel, but she is also attracted to Zack, who seems to be much more a ladies man. Certainly not for her, as she doesn’t think he will stay in Queensville for long either. She also does not believe that Zack is romantically interested in her at all.
So no, there is not a love triangle here, just a careful woman who takes her own time to find out what she wants, or who she wants.

I like how Jaymie has taken in her two damaged pets and cares for them. She is also very good at finding things out, even when it gets a bit dangerous.

They mystery part was very well done; I really did not see it coming at all. And still thinking back there were clues enough. I look forward to more books by Victoria Hamilton, she has a few more series out there as well.