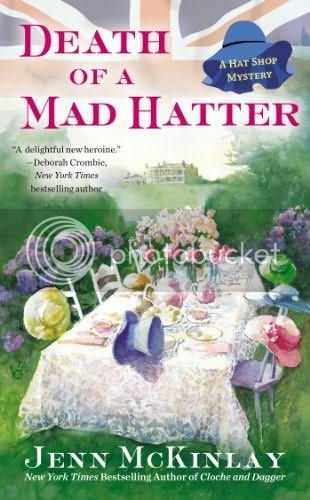 ONE IN A MILLINER
Scarlett Parker and her British cousin, Vivian Tremont, are hard at work at Mim's Whims—their ladies' hat shop on London's chic Portobello Road—to create hats for an Alice in Wonderland themed afternoon tea, a fund-raiser for a local children's hospital. It seems like a wonderfully whimsical way to pass the hat, and Scarlett and Viv are delighted to outfit the Grisby family, the hosts who are hoping to raise enough money to name a new hospital wing after their patriarch.
Unfortunately, the Grisby heir will not live to see it—he's been poisoned. When traces of the poison are found on the hat Scarlett and Viv made for him, the police become curiouser and curiouser about their involvement. Now the ladies need to don their thinking caps and find the tea party crasher who's mad enough to kill at the drop of a hat…


Another review I had no inspiration for writing, and now three months have passed, and writing a good review is not going to happen anymore.

And I really did enjoy this book. I love the main characters, and their English banter. Scarlett and her cousin Vivian own a hat shop. Scarlett has only recently arrived from the States after a love affair went bad (and viral on the internet!) and she has taken over the business side of the shop, as Vivian is a wiz at making the most amazing hats.

When a rich client asks Vivian to design the hats for an Alice in Wonderland tea for herself and her family, Vivian accepts. Dotty Grisby is an old friend of their grandmother, and she keeps mistaking Vivian for her old friend. It means a lot of expensive hats in a short amount of time. Not all the family are nice though, especially the heir, George, is a nasty piece of work with the way he treats his young wife and Vivian. But there are also some younger cousins, who really seem to take a fancy to Vivian and Scarlett.

So when George is killed during the tea party, Scarlett will have to clear her name. Unfortunately, there are many suspects. And will they all just talk to her? His widow seems to want to confide in her, and other people warn her away from the case.

Like Harrison, their accountant. Or is he something more after all? Scarlett certainly is not happy when she finally finds out about his involvement in the business ...


It is a really good mystery, I could not figure it out on myself. There are some big surprises, and some really evil characters are revealed in the end. I did not see that coming at all. All the characters are really colourful and lifelike, and I enjoyed reading about them. I sure hope there will be more books in this series to come.