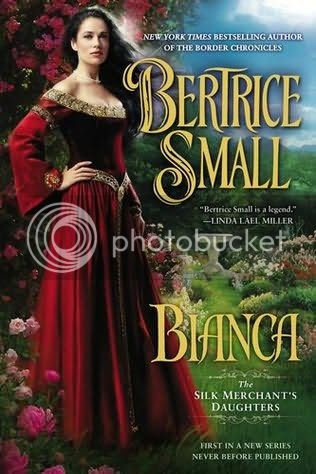 Florentine silk merchant Giovanni Pietro d'Angelo and his wife want nothing more than to marry their daughters to wealthy men of distinction. But when their son's dangerous indiscretion implicates him in a tragic accident, it is their eldest daughter who must pay the price. Blackmailed by the powerful and debauched Sebastiano Rovere, the Pietro d'Angelos must give beautiful Bianca in marriage to Rovere to buy his silence.
With the aid of her mother, Bianca flees her dark, cruel union, seeking shelter in a seaside villa. It is the shocking murder of her husband that allows her to find the possibility of love at last. But Florentine society would never approve of the man she's chosen: Prince Amir, grandson of Memhet the Conqueror.

Warning.
Perhaps you know that I don’t like to read erotica, and if so, you will be surprised to know that Bertrice Small is my favourite author. I have lots of favourite authors, but she is on the top of that list, and has been for many years. Yes, Bertrice Small writes historical romances with a lot of historic details, and a lot of sex. In my opinion, she wrote erotica before the genre was invented. And not just very hot love scenes between the hero and heroine, but also the wrong kind, the forced kind. Bianca is not only raped by her husband, also by his female sex slave on the orders of her husband. And this book is going further than all the others. If you cannot handle rape, amongst a husband and his child bride, you really should not read this book. It also touches the subject of bestiality, and yes, that disturbs me, even though our heroine escapes in time. Still, I kept on reading, having to know what would happen next. Bertrice Small always writes very strong and down to earth heroines, they survive, and find happiness again. Bianca is no different.
And no, there is no warning on the book cover; I really think there should be.


Florence, 1474.
Bianca Maria Rosa Pietro D’Angelo is called the fairest virgin in Florence, even though she has been kept secluded her whole life. The only time when she is allowed outside her fathers palazzo, is when she accompanies her mother to mass in the church across the Piazza Santa Ana. More and more young nobleman gather in the vain hope the catch a glimpse of her face. Demurely looking down, and veiled, Bianca hurries across. Her Venetian grandfather is busy finding her a husband in Venice, as her mother doesn’t want her children to marry in the dark city of Florence. She herself misses Venice every day. Not that she had more freedom in Venice, but it was a lighter city.
But then her father gets blackmailed by the most powerful lawyer in Florence. He will ruin their family and their silk business if he does not get Bianca for a bride. Her father doesn’t want to give away his eldest daughter to a man with such a wicked reputation, but he has no choice. He has to protect his son and heir, and the family name. Her mother is furious, and does her best to stall the wedding as long as she can. But Bianca already has to submit to Sebastiano Rovere’s advances. The contracts are signed, so legally she is already his possession. At only 14, she is totally not prepared for everything he demands of her. And after the wedding, it only gets worse. Sebastiano is really depraved, and his sex slave only encourages his bad habits and appetites. She enjoys humiliating the pretty bride. Bianca fights him for as long as she can, but one day she just gives in, in the hope that he will reward her with a visit from her mother. When her mother finds out just what has been happening to Bianca, she takes her away at once, and hides her in a nearby convent, run by one of her relatives. Sebastiano is furious of course, and wants his wife back. She is his to kill if he so pleases, and he will not be ridiculed by his acquaintances.
For two years, Bianca stays hidden, while her family fights to get an annulment of the marriage. Unfortunately, Rovere also has a cardinal in the family, with the same deprived morals as his own, and with some other likeminded men, they hold it off. At first she stays at the convent, where she is fairly happy. But later she is whisked away to a little villa at the coast with her trusted maid servant. Her family does not dare contact her in fear of her husband finding her.

Lonely Bianca celebrates her sixteenth birthday, when she meets her only neighbour on the beach. At first very afraid that he will find out who she is, and talks about her, she avoids him. But later, through his beautiful dog, they start to become friends. And as she is married, it is only as friends, even though the Prince wants more, much more. He vows to keep her safe, to take her to Turkey with him. Even though he already has two wives, given to him by his uncle, the Sultan, she will be the wife of his heart, and accepted by his household as such.

After her husband is finally murdered, Bianca has no intention at all to be married again. But she will happily be Amir’s lover. Her family has other plans though, and they manage to get rid of Amir. Bianca will be married soon, her grandfather is already arranging everything. After all, she is a wealthy widow now! Her refusal means nothing, she has no say in the matter. Bianca can only keep waiting for Amir to find her, and to take her with him.

But they are not safe in Turkey either, one of the Sultan’s wives sees Amir as a threath to her own son, whom she wants to be the next Sultan, and she plots to have him murdered.


Even though the first part of the book is very rough, with the forced sex scenes, and the second part is slow, with Bianca safe in hiding, I really enjoyed to book. But to be honest, I did have a déjà vu feeling a lot, as it feels like multiple storylines from her early books are used for this one. The forced sex made me think of the first Skye O’Malley book, and the harem plots of the Kadin. Still, Bertrice Small has such a great writing voice, she blends her history so well in the love story, I did not really care too much.
I am looking forward to reading the next book, about Bianca’s younger sister. She is a very wilful young girl, and her parents sure will have their hands full with her. And I cannot think that book will be as “bad” as the start of this one.

I liked Bianca, she is very young, which is normal in that time period, and she recovers from her ordeal, even finding love again, and willing to take a lover. She keeps hoping, and she adapts to the strange customs of the “infidel”.
I also liked Amir. He respects her decisions while she is still in Italy, but as soon as she is his wife, he becomes more alpha. He listens to her, with regard to his other wifes and other decisions, but he is master.