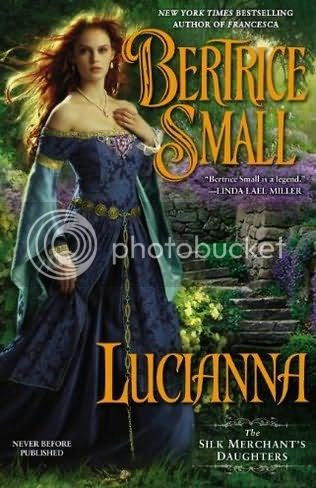 In this sweeping new series of Renaissance Italy, Bertrice Small does it again with all the passion and historical splendor that has captured the imagination of her legion of fans….

After her two elder sisters become the scandals of Florence, Lucianna Pietro d'Angelo is in the difficult position of finding a wealthy man who will have her for his wife. She has little choice but to accept the proposal of an aging bookseller—a not entirely disagreeable union in which Lucianna comforts the dear man in his final years. When he passes away, she inherits his shop and, with it, a sizable fortune.
Lucianna is content with comfortable widowhood—until Robert Minton, Earl of Lisle, visits her bookshop. The Englishman is not only dashing and handsome—he's a trusted courtier of Henry VII.
The Pietro d'Angelos cannot deny the spark of attraction between their daughter and the earl, so they scheme to send her to London. There, Lucianna steps out of the shadow of her quiet Florentine life, pursuing a love of which she never dreamed and rising in London society all the way to court of the new Tudor king.


After the Medici Bank fell, and the silk merchants of Florence got some fierce competition from Milan, there was not much money left for a decent dowry for Lucianna, the third daughter of Giovanni and Orianna Pietro d´Angelo. Orianna was amazed at how easily Lucianna accepted the marriage proposal from an elderly bookseller, who just wanted a pretty young wife to take care of him in his old age. Especially after the antics of her older sisters, Bianca and Francesca. But Lucianna knew that she did not have such choices as her sisters had, no hordes of suitors are after her hand. And when she got to know Alfredo Allibatore, she liked him and their marriage was one of contentment. But now her Alfredo has died, leaving her his house and his fortune, and his only son just the shop and a small amount of money.
Lucianna quickly followed her sisters’ example, telling her mother she has no intention of remarrying any time soon. After all, she is now a rich widow, and does not need a husband to take care of her. She intends to enjoy life a little when her mourning period is over. Her son-in-law Norberto is glad that Lucianna wants to keep helping in the shop, as he is not good with customers, and Lucianna is.

And so Lucianna meets for the first time Robert Minton, the Earl of Lisle, when he is looking to have a book of poetry bound as a gift for the Queen. He came to Florence to buy silk for the Queen as well, as a gift from the King, and Lucianna quickly steers him towards her fathers shop. But the Earl is interested in more than just silk and books, he is interested in Lucianna himself. But Lucianna rebukes him, as she is not yet out of mourning, if he wants to join her in church, he will have to wait a few more weeks. Robert doesn’t mind, he has never felt this way about a woman before. And the same day that her mourning period is over, he joins her in her pew in church, and afterwards, takes her out for a walk in her parents´ park. Where they are of course met by her parents and Orianna invites the Earl inside for dinner. Giovanni remembers the Earl from him buying a large order of silks, and the Earl tells him his intentions towards Lucianna are honourable. He even asks his permission to court her. But that permission is not Giovanni´s to give, Lucianna will decide for herself. Of course, he doesn´t tell Orianna about any of this, she would only push Lucianna too hard.

When the Earl tells Giovanni of the Milanese intention of opening a shop in London, so London merchants don´t have to travel to Italy to buy their silks, he urges Giovanni that Florence should do the same. But who should they send? Giovanni´s oldest son Marco has no interest in the business at all, he prefers spending his time with his mistress, it is Lucianna who is keeping the family afloat while managing the silk shop for them, so Giovanni can retire. Still, an English Earl in the family is not a bad thing, if only he can persuade the other members of the guild that Lucianna is the best choice for this. She does speak English fluently, and knows everything there is to know about the silk business.

And so Lucianna is send to London to open up shop there. With help from the Kira banking family, everything has been readied before she has arrived. A house, a nice shop, and servants. Her brother Luca will accompany her as her protection and to learn the trade. He will have to take over from Marco in Florence one day, or the family will be ruined soon.

Like in Florence, the fair Lucianna is soon besieged by unwanted suitors, but those English lords are not interested in marriage, they want her for their mistress. Until Robert Minton shows up on her doorstep and sends them all packing. He still wants to marry Lucianna, but Lucianna hesitates. She likes her life as it is, and she has a responsibility towards the guild. Even though she has a great assistant in the shop, her brother is not nearly ready to take over. But during a visit to his estate in Herefordshire, Robert manages to persuade Lucianna to marry him, and he wants it to happen immediately. There is not time to fetch her parents from Italy, but Luca will be their witness. Luca is not so happy with this; he was supposed to protect Lucianna. Does she really want to marry this Englishman?

But marrying Robert is not the happy ending of the book, they still need the King’s approval on their marriage, and more important, that of his mother. She had already envisioned one of her maidens as Robert’s bride. And the scorned lady is not happy with this!
And then Luca gets in trouble, and they have to ride as fast as possible to London to get him and their family out of it….


From all the authors I love to read, Bertrice Small is my most favourite. I have been reading her books for 30 years now, and they still never bore me. This one was a bit surprising though, as it was lacking the steaming hot love scenes she is so well known for.

I like Lucianna, she does not throw a tantrum when she has to marry an old man, but makes the best she can of her marriage. And she chooses Robert herself, and learns to enjoy living in the country. And although she does meet the King and his Mother, they do not live at court as the blurb suggests.
As always, there are a lot of historical facts interwoven in this story, and there was some repetition there too. A bit too much, to be honest. Still, I enjoyed the story and look forward to Selena, the fourth book in this series. And there was one glaring omission, Luca was supposed to travel with Lucianna to England, but he was never mentioned again, until the invitation to witness her wedding. That bit really bothered me, as the journey was described as just Lucianna and her maid, and their servants. The same while being in London, Lucianna and her servants in her new house, and Lucianna and her new shop assistant in the shop, selling silks to the London merchants.