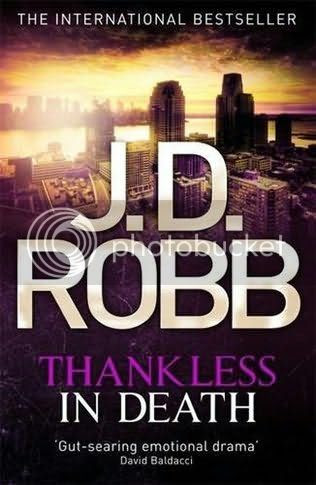 Murder doesn't stop for Thanksgiving.
As the household of NYPSD Lieutenant Eve Dallas and her billionaire husband Roarke prepares for an invasion of family and friends, an ungrateful son decides to stop the nagging from his parents - by ending their lives.
Soon Jerald Reinhold is working his way through anyone who has ever thwarted him in his path to an easy life. Eve is increasingly frustrated in her efforts to cover all the potential victims as Jerald stays a terrifying step ahead.
As the festivities begin, Eve is desperate to identify which victim on Jerald's long list will be the next, so she can stop the killing spree...


Hard to believe, it is book 37 already. I still love this series to peaces, and I want a Roarke of my own.

After a few days of peace and quiet, Eve is catching up on her paperwork, and thinking about assigning some old cold cases to her team. Of course, telling Roarke this, is totally jinxing it. And that while his family from Ireland is coming over for Thanksgiving in a few days, along with all their friends.

The murder is particularly gruesome, and very easy to solve. To catch the man though, is not so easy. Jerald Reinhold is a loser, always blaming some one else for his misfortune, while it is his own lack of ambition and interest in working for a living, that is causing his problems. His parents have had enough of it. Partying every night with his friends, and not even bothering to look for a job again, it has to stop. He will have until the end of the month to find a job, or he is out in the streets. They have supported him enough, given him enough chances. Now even his lovely girlfriend has kicked him out after he stole her tip money and blew in Las Vegas, their tolerance is over.
When his mother is making him a sandwich for lunch and gives him this ultimatum, something snaps in Jerald, and he takes the knife his mother just used, and stabs her. 50 times. Satisfied that she won’t be nagging him anymore, he then eats his sandwich and waits for his father to come home from his boring job. And kills him with his old baseball bat. After sleeping like a baby in his own bed, he then loots the place and leaves the next evening. On Monday morning a concerned neighbour finds the bodies, and the case is given to Eve. No one could have guessed that Jerald finally found something he likes, something he is good at, and that he has no intention at all of stopping murdering people he thinks have wronged him. And so he goes on a killing spree, taking his victims money and possessions, and getting richer in the process while amusing himself.

Eve has the difficult job to predict who will be the next victim, how far back will she have to go, and whom to protect. And of course not every one believes her, or wants protection. But some people immediately believe what Jerald has done, they have seen his mean streak, his selfishness, his entitlement.

Catching a killer and dealing with a house full of guests is not all Eve has to deal with. Her Commander wants to promote her, but she is not ready to give up her job in the field for a deskjob, and both Roarke and Eve will be honoured with a medal in a big ceremony at city hall. This makes both of them very uncomfortable, but it is a big honor, and they have certainly deserved it in the line of duty.


A great book, and even though the killer is known, catching him is difficult. He has the devils own luck it seems, staying just an hour ahead of Eve at times. Reading his point of view, and what he was doing to his victims was creepy at times, he really is a psychopath who thinks he will be a good assassin once he is done killing for fun.
As always, I enjoyed the glimpses in Eve and Roarke´s private lives, and how they deal with everything. They may get mad at each other, and spar to get it out of their system, but love is never far away. Not so much Summerset in this book, alas, as I like their snarky comments. And it is always fun to see how Eve deals with family and friends and how to react to normal marriage things and responsibilities. But she is growing and learning, and even thinks of things to do on her own.