The third book in the White House Chef Mystery series, published January 5, 2010.
Genre: cozy mystery
Cover: I like it 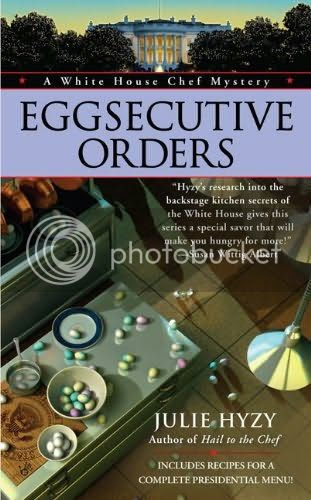 With the White House’s big Easter celebration - along with a visit from her family – right around the corner, Olivia Parras has too many eggs in one basket. Add the death of a government official and she’s starting to feel more like a basket case…
What’s worse than a guest not liking your food= A guest dropping dead from it. When NSA big shot Carl Minkus dies right after eating the dinner Ollie’s staff had prepared, all forks point to t hem. Now, the Secret Service is picking apart the kitchen, and scrutinizing the staff’s every move.
The timing couldn’t be worse. Ollie’s mother and grandmother are visiting - only to find her embroiled in a media frenzy. How’s she supposed to prep for the White House Easter Eggs Roll without access to her kitchen? Now, Ollie has no choice but to find the real culprit – before she cracks under pressure…


Ollie is very excited that her mother and grandmother are visiting her in Washington, she has already arranged a private tour of the White House for them. But then Ollie is called first thing in the morning to get back to the White House. Paul doesn’t want to tell her why, but there is a car waiting for her downstairs. But that is not the only thing waiting for her, besides some beefy Secret Service agents. A mob of reporters are waiting for her too, shouting their questions at her. Apparently, someone died at the White House last night, after eating her dinner! No, of course she did not poison him!
But with hours or interrogation and no way to contact her mother and grandmother, who will be arriving at the airport soon, waiting for her, Olivia doesn’t know what to do. She and her staff are banned from the kitchen for now, and Secret Service agents will be cooking for the President and his family and guests for now.
Her Secret Service boyfriend Tom has taken care of her family though, when he was sent home hours ago. But his boss sure doesn’t like Ollie one bit, and thinks she is meddling where she doesn’t belong, thanks to the previous cases she helped solve. But now she and her crew are the main suspects, and she is in deep trouble.

With nothing to do, Ollie at least has plenty of time to show her family around Washington, and their first visit is to Arlington, to her father’s grave. But there she runs into the widow Minkus, and she accuses Ollie of murder! A friend interferes, but Ollie is not so grateful anymore when that friend shows a lot of interest in her mother! What is she to think of that? Her grandmother thinks it is good for her mother to have a little fun while they are in Washington, but Ollie doesn’t trust him very much. Mrs. Minkus clearly doesn’t like the man, even though he is introduced as a friend of the family. And so she starts thinking of other suspects, even though Tom has warned her away from the case. Apparently, his career is on the line this time, and she needs to behave herself and not poke her nose into anything. Perhaps their relationship is just not meant to be … As of course Ollie cannot help it, especially as she and her friends and colleagues are the ones under suspicion.

Getting together with her staff, they try to find a solution to their planning problem for the Easter Egg Roll. They have to boil and dye thousands of eggs, and time is running out. Ollie never thought about Bucky and his private life, he is a very good chef, although an ornery one in her kitchen. But thanks to his secret relationship, they soon have the eggs at their disposal and his dream kitchen to use to prepare them.


I really enjoyed this further look into the private lives of the kitchen staff and the trouble Ollie finds herself in this time. As Minkus was on a terrorist-witch hunt, there are plenty of suspects, but the real killer sure was a surprise, again. I love how Julie Hyzy can write an entertaining mystery, and still surprise me with the plot in the end. I am sorry about Ollie’s relationship with Tom, but I never really felt it between them. I liked a certain soldier from last book more …

I am looking forward to the next book in this series, which is already on my shelves. I enjoy Julie Hyzy’s writing style a lot, she manages to describe a lot of things in a captivating way, especially as I have no idea what goes on at the White House. The Easter Egg Roll sounds like a lot of work and a lot of fun too.

As always, there are some delicious recipes in the back of the book, served in the White House for real.