The second book in the Sons of Destiny series, published April 1, 2008.
Genre: fantasy romance
Cover: I like it. 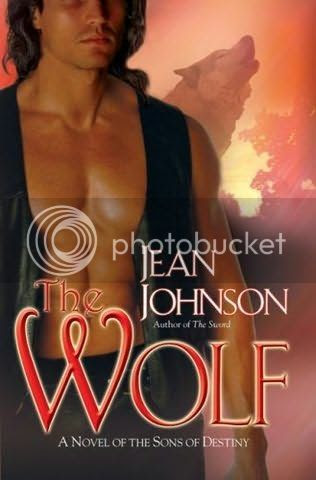 Eight brothers, born in four sets of twins, two years apart to the day – they fulfill the Curse of Eight Prophecy.
To avoid tempting Destiny, they’re exiled to Nightfall Isle, where females are forbidden. When a childhood friend seeks refuge among the brothers, it triggers a confrontation with their mysterious enemy.
Alys arrived desperate and afraid, but welcomed by Wolfer, the second-born brother. They have each harboured deep feelings for the other, but Alys harbors a secret as well. It is her very own uncle who torments the exiled brothers, plaguing them with creatures, and who seeks to kill them to secure their ancestral inheritance for himself.
But confessing her uncle’s plan to the brothers will put them at even greater risk, for their resistance against the evil mage has stirred his wrath. This time Alys fears her uncle is determined to exterminate the brothers once and for all – destroying the star-crossed lovers as well…


I just had to jump right into the second book after reading the first, and yes, I have already started the third, and the rest is lying on the livingroom table ready to be picked up.

Alys of Devries has been in love with Wolfer ever since she was three and he nine years old. Her parents were visiting his parents for some business, and she was playing in the court yard. When she skimmed her knee, he found her crying and dried her tears, and played with her. After that, she pestered her parents to bring her as often as possible. She was not a courageous little girl, but to be with Wolfer, she would climb trees and whatever the boys would be doing.
But then her parents died in an accident, and she had to go live with her Uncle Broger. And her life turned miserable. He treated her as an unpaid servant, slapping her around and starving her when he had a mind to do so. He even would have taken her to his bed like his other servant girls, if she had not swayed his mind by telling him, he could get more for her if she was still a virgin. Broger is a truly evil Dark Mage, he has stolen the Brothers Dukedom by killing their other uncle, who was Duke until the brothers could return home. He has put many spells on Alys to make her obedient and unable to fight him or run away. He even can take her life force and magic. The only magic he teaches her, is what is useful for her to know to be able to care for the illegal and deadly animals he is breading. Animals she helps him send to Nightfall Island…

The only good thing in Alys life is Morganen, who is secretly helping her and teaching her when ever he can through the mirror. But she will have to find a way to thwart her uncles’ magic herself. And so when Morganen finally tells her it is time for her to come to Nightfall Island, it is just in time, as her Uncle tells her, he has sold her to another Count, a lecherous old man with awful hygiene, and she is to leave the same day. Alys has just perfected the magic she needs to set her own death in scene, making her uncle give her up ad death, or he will get her back. So one night, when the soldiers escorting her to her bridegroom, are getting a bit lax in their surveillance, Alys takes the opportunity to create a diversion of herself being taken away by some deathly Pookrah. She then melts a silver amulet into her skin, to sever all the spells her Uncle has laid on her. And when that is successful (this could not be practiced!) she sets out for Nightfall Island.

Taking a Gate to the coast, she almost runs into her other Uncle in the village. The only way to stay unseen is to enter a bar/brothel and to hide in one of the rooms when her Uncle also enters the establishment. After witnessing one of the whores and a client doing their thing, Alys gets a lovely education by the woman in question. She sure wants to try some of this out on Wolfer! Alys is also a shape shifter mage, like Wolfer, and she uses that to reach the Island, where she is found on the beach by Wolfer. At first he does not recognize her, as she did not have those curves when last he saw her, but he is certainly overjoyed that she is here. He never did forget her either. The enchanted lock of her hair around his wrist has managed to stay his temper more than once.

Wolfer is the second brother, a shapeshifter mage, but the wolf is not his only shape. He can also be a stallion and a raptor. When Alys arrives, he knows pretty soon that he wants to marry her, that she is his Destiny. And he sets out to court are, as Kelly has informed him of the hardships Alys had to endure at her uncles hands. But Alys does not want to take it slow, she just wants Wolfer in her bed (and out of it).
And when it is found out that Alys took care of the deadly beasts they were plagued with, the brothers are not at all happy. But Morganen knew all about it, and he tells them more of her back ground. So now they know who their enemy is, and they can plan to destroy him.

Being independent from Katan also means that they own the desalination plant, the salt and algae blocks it produces. They will no longer allow the merchants to take it for free, as they have been doing for decades, the merchants will have to pay for it. Of course the merchants are not happy with that, but fighting some of the most powerful mages of Katan is not an option.


I enjoyed Alys, she is half timid and shy, and half courageous and brazen. Of course she drives Wolfer crazy. Kelly sets out to teach her kung fu, so she can defend herself against her Uncle when necessary. And the brothers plan to teach her more about her magic, as she never did get an education while living with her uncle. But first they have to make some magical mirrors to scry for Dominor, who was abducted in the last book, and to fight her uncle.

And what to say about Wolfer? He is fierce, and protective, and he will do everything for his Alys. As long as she agrees to wed him over the eight altars. He is so angry with Broger for treating Alys like that, and he can’t attack the man without the magic slapping back at him a hundred fold. He is a bit jealous of the bond between Morganen and Alys, and enjoys slapping Morganen around a bit on the training grounds.

Alys also wants to work to earn some money, as she has brought nothing with her. She would like to take care of the animals, as that is what she is good in, and Kelly is all too happy to give the care of the vicious citizen-chickens over to Alys. Alys would also love some cows and a bull to have fresh milk and cheese, and perhaps some sheep for their wool. But for now, she will share Wolfer's chores with him.

Stay tuned for more enthusiastic reviews about this series, as I do love those books. Jean Johnson´s writing voice is just right for me, her sense of humor, the characters she creates and especially the neat world building. I would love to visit Nightfall Island. Lots of action, magic, and hot love scenes in this second book in the series.


The Second Son shall know this fate:
He who hunts is not alone
When claw would strike and cut to bone
A chain of Silk shall bind his hand
So Wolf is caught in marriage-band