The third book in the Irish Hearts series, published December 2000.
Genre: contemporary romance
Cover: Lovely, my own bookcover is different but lovely as well. 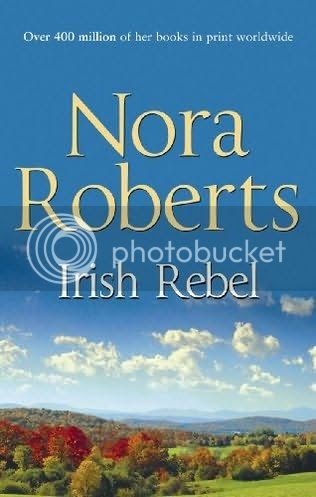 She was practically royalty, the daughter of a rich, renowned horse-breeding dynasty. He was just a hardworking horse trainer. But Brian Donnelly was in America now, where even he might aspire to possess the breathtaking Keeley Grant. Her wealth and position didn’t deter Brian … for it was the innocence Keeley offered him that beguiled the wild Irish rebel and threatened to corral his restless heart!


Another old romance by Nora Roberts, the third and last book in this first series ever. And even though the ingredients are the same, an Irish person coming to America to work, racehorses and love, it was still very different. I loved catching up with the previous characters, in fact, our heroine is the oldest daughter of the first couple, Travis and Dee.

Brian Donnelly has been asked by Travis Grant to come to America to be his new head trainer of his famous racehorses. Paddy is getting old, and wants to retire, return to Ireland for his last years, and he has recommended Brian. Brian is flattered, and as he is a true wanderer, he loves the opportunity to come to America. He is the best trainer there is, but he never stays in one place for more than three years. But from the moment he sees Keeley Grant, something changes. And he is scared of what he is feeling, how can a simple man like him ever have a princess like that. This is how he sees her, a spoiled little rich girl, used to lazing away the days and getting whatever and whomever she wants. He could not be farther from the truth though. Like the rest of the Grant children, Keeley has always worked hard in the stables alongside her family. And now she has her own riding school, where she not only teaches rich country club children, but also the underprivileged ones, the scarred ones. Like the horses she rescues, she is drawn to the children in need, and tries to contribute as much as she can. Her business is doing well, but is growing above her head, she really needs to hire an assistant.

At first Brian tries to seduce Keeley, thinking she knows the ways of the world, especially as she keeps turning him down. When her little sister fills him in on the true Keeley, he starts seeing her differently, with respect for her accomplishments and her goals and her hard work. And when she tells him, when he finally gets through her defences, that he will be her first lover, he gets scared a lot, and is determined to leave her alone, ignore her if possible. But that does not work out, and now Keeley is determined that she wants him, like she has never been attracted to another man before, and she will have him.


Their hunt and chase was fun to read about, and at first Brian is really arrogant and condescending, but Keeley totally makes him eat crow and fall for the real her. Keeley is a strong character, she knows what she wants, and goes after it. She tries to do it all on her own, but is not to proud to ask for help when needed. Brian keeps thinking that he is beneath her for a very long time though; seducing the boss’ daughter is just not the thing and could cost him his job. But in the end his eyes are opened, and that was a fun scene. Keeley did not back down but got up in his face, making sure there was no big misunderstanding that caused them to part ways.
Brian is a real horse whisperer, and although I know absolutely nothing about caring for horses, especially racing horses, it was fun to read about.

A golden oldie, a classic Nora Roberts feel-good story, and I enjoyed it a lot. Recommend reading for in between your heavier books.