As you perhaps already know, I am a big fan of Suzanne Johnson’s Sentinels of New Orleans series, a great urban fantasy series taking place in and around New Orleans. I have also read the first book in the Penton Vampire Legacy series, which is paranormal romance written by her alter ego Susannah Sandlin.

I am very much looking forward to reading the third Sentinel book, Elysian Fields, and am very happy that Suzanne promised me an ARC. The book will be published on August 13. Susannah has also recently written a serial novel called Storm Force, the first book in the Omega Force series. The book is now available in paper as well as ebook as it is finished, and I am looking forward to reading that one.


Elysian Fields, the third book in the Sentinals of New Orleans series, to be published August 13, 2013. 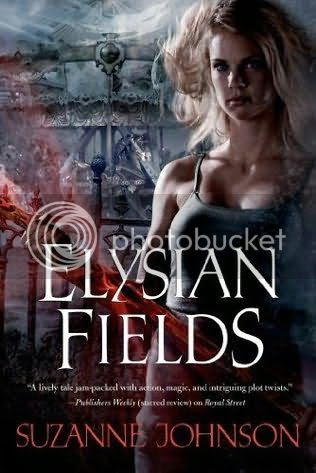 Elysian Fields by Suzanne Johnson is the fun, fast-paced third book in the Sentinels of New Orleans, a series of urban fantasy novels filled with wizards, mermen, and pirates. In the tradition of the Sookie Stackhouse books, these novels are perfect for readers of paranormal fiction and "fans of Charlaine Harris and Cat Adams." (Booklist)

The mer feud has been settled, but life in South Louisiana still has more twists and turns than the muddy Mississippi.

New Orleanians are under attack from a copycat killer mimicking the crimes of a 1918 serial murderer known as the Axeman of New Orleans. Thanks to a tip from the undead pirate Jean Lafitte, DJ Jaco knows the attacks aren't random - an unknown necromancer has resurrected the original Axeman of New Orleans, and his ultimate target is a certain blonde wizard. Namely, DJ.

Combating an undead serial killer as troubles pile up around her isn't easy. Jake Warin's loup-garou nature is spiralling downward, enigmatic neighbour Quince Randolph is acting weirder than ever, the Elders are insisting on lessons in elven magic from the world's most annoying wizard, and former partner Alex Warin just turned up on DJ's to-do list. Not to mention big manoeuvres are afoot in the halls of preternatural power.

Suddenly, moving to the Beyond as Jean Lafitte's pirate wench could be DJ's best option.


Suzanne keeps her readers nicely updated on what is happening in her world on her daily blog, Preternatura (where she has a lot of giveaways!), but I would like her to tell us herself what she is planning and plotting for the future.

Aurian: Hi Suzanne, can you please tell me and my readers what your plans are? How many books have you planned in the Sentinels of New Orleans series? Do you know some more details about the short story Jackson Square yet (that was a nice free read on Suzanne’s website a few weeks ago). And what are your alter ego’s plans?

Suzanne: Hi Aurian—thanks for having me here today! Wow…that’s one big question : )

Let’s see. There will be at least five books in the Sentinels of New Orleans series; I recently signed on with Tor Books for two more. The fourth book is tentatively titled PIRATE’S ALLEY and the fifth, BELLE CHASSE. (All of the book titles are well-known streets in New Orleans, but have some relation to the plot.) One, if not both, of them will be out in 2014, but I don’t yet know publication dates. It’s a little too early. After that, it all depends on how the books sell. The worldbuilding is certainly big enough to support a long series, but we’ll see how fresh it still feels after two more books. It’s still a lot of fun to write, and I can’t wait to really dig into the fourth one.

The novelette “Jackson Square” I hope to have out as an inexpensive digital download around the first of September. I’d hoped to do it earlier but life had other plans! I am working on some bonus content that will be paired with it—Jean Lafitte’s account of the Battle of New Orleans, which is mentioned in the story, and perhaps a short essay on what we do and don’t know about the real pirate Jean Lafitte. He was a fascinating and complex man.

Ah, my alter ego! As Susannah Sandlin, I am working on a fourth book in the Penton Vampire Legacy series, called DELIVERANCE. I don’t yet know whether that one will come out through my publisher or if I’ll put it out myself. I also have a proposal in for a second book featuring the characters from STORM FORCE and a new project that would be more of a thriller involving salvage diving and the Knights Templar.

So things are hopping in my household! I’m trying to figure out how to add more hours to my day : )