Bertrice Small – All the Sweet Tomorrows

The second book in the Skye O'Malley series, published April 1, 1984.
Genre: historical romance
Cover: this is my cover 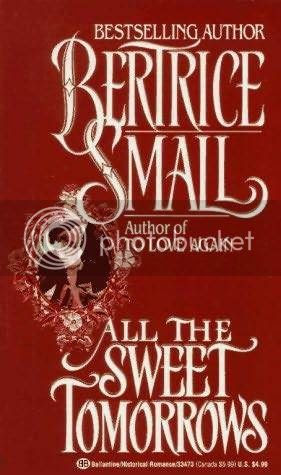 A pawn in the bitter war between England's Queen Elizabeth Tudor, and Mary, Queen of Scots, Skye must once again, unprotected, fight for her children.
At Elizabeth’s command, she marries the Duc de Beaumont de Jaspre, whose Mediterranean principality is vital to England. Her new world, though tortuously cruel at first, is transformed by Skye’s hot-blooded desires-only to be shaken with the news that her beloved former husband may be alive in Algiers. Her daring flight into eroticism and danger leads her ultimately to her heart's true destiny--as bold and sensual as Skye herself.
All the sweet tomorrow’s continues the blazing adventures of raven-haired, emerald-eyed Skye O’Malley - a woman born to be loved by men, yet too proud and incomparable to answer to anything but the call of her own passionate soul.


The saga continues. Skye is married to Niall Burke, and has just given him his son and heir, after their first child, a daughter, was born while she was imprisoned in the Tower (see: Skye O’Malley). Then Niall is lured to his death by his former wife, Darragh O’Neill. Her father-in-law dies as well, and Skye is once again unprotected. She also needs the Queen’s help to keep her son Padraic’s estates safe from the land hungry English in Dublin and her greedy Irish neighbours.
The Queens’s help costs Skye dearly: she will have no time to mourn her husband; she is to marry the Duc the Beaumont de Jaspre, and give England a safe harbour in the Mediterranean. Lord Cecil has told her the Duc is elderly and sickly, and she should be home to her children in two years or so, but he has lied to her. The Duc’s cousin Edward, who is in London to negotiate the marriage, tells her differently. But she has already given her word, and can’t go back. Edward, who is a dwarf, paints her a beautiful picture of his small country, and she will be happy there.
What Edward doesn’t know is that his cousin has been mindwashed by an evil priest, and he has outlawed the Catholic Faith, and is determined that Skye will be his obedient wife after a daily beating.
The next morning after their weddingnight, Skye turns the tables on Fabron, threatening to kill him if he does not listen to her. Her logic sways Fabron from the evil influence of the Pastor, and in the next few weeks, they get to know each other, trying to make their marriage a good one. But when the Pastor intrudes on them, and starts beating Skye, Fabron kills the priest and then has an apoplexy that paralyzes him. As Skye is not pregnant, they need to find another heir, before the French take over the country. Fabron’s bastard brother is the logical choice for that. Baron Adrian is living in poverty, so he jumps at the chance to become a rich Duc, but he also immediately wants Skye for himself. And Skye is willing to marry him, until she gets news from Osman, telling her that Niall is not dead. She immediately forgets all about Adrian and her small Duchessy, and sets sail to Algiers with Robbie on her flagship, to find out what Osman knows.

Niall is the slave of an Ottoman Princess in Fez, and the only way for Skye to enter Fez, is as a slave herself, to Osman’s nephew. Kedar is not in on the plot to rescue Niall, and to him, Skye is no more than a slave, a possession, used as he sees fit. The months spend as his slave are not easy on Skye, as he is insatiable and she has instantly become his favourite. He is even thinking of making her his first wife. But though Kedar keeps his slaves in line by painful punishments, Princess Turkhan uses drugs and opium on her slaves, and Niall has been thoroughly addicted. After months of fighting her, he suddenly realises he has been thinking about it all wrong, he should seduce her and try to get his freedom back. Turkhan doesn’t care he is a rich nobleman in his own country, that was his past, now he is nothing more than her slave.

With the help of Kedar’s younger brother, whom he sold to Princess Turkhan and is her other favourite, Niall manages to escape to one of Skye’s ships, and Skye will join him in a few days. But it is too late already, Niall is too addicted, and he is dying. Skye is heartbroken, was all her suffering as Kedar’s slave for nothing? She won’t marry again, she will not feel this pain again! But her good friend Adam de Marisco has other plans for her, and he takes her with him to his family in France.


Skye’s adventure commences, and even after all this time, 8 children and 5 husbands, she is only 32. She has been the pawn of royalty, from Queen Elizabeth of England to Queen Catharine de Medici of France due to her beauty. But she has survived it all, and has emerged the stronger for it. She is wealthy and powerful and surrounded by her beloved husband and children. But now it is time for her children to start their own lives, to marry and have children of their own. And adventures.

I am glad there are more books about Skye’s children and grand children, and Skye lives to a great age. She plays a role in their lives, and I love to read about them all.