The fourth book in the Alpha and Omega series, published March 3, 2015.
Genre: urban fantasy
Cover: strong, but I just can’t see Anna in this cover model. 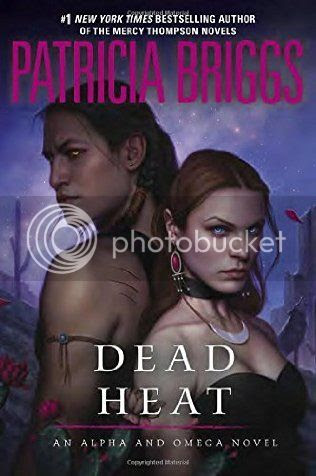 Praised as "the perfect blend of action, romance, suspense and paranormal" (Rex Robot Reviews), the Alpha and Omega novels transport listeners into the realm of the werewolf, where Charles Cornick and Anna Latham embody opposite sides of the shifter personality. Now a pleasure trip drops the couple into the middle of some bad supernatural business....
For once, mated werewolves Charles and Anna are not travelling because of Charles' role as his father's enforcer. This time their trip to Arizona is purely personal, as Charles plans to buy Anna a horse for her birthday. Or at least it starts out that way....
Charles and Anna soon discover that a dangerous Fae being is on the loose, replacing human children with simulacrums. The Fae's cold war with humanity is about to heat up - and Charles and Anna are in the cross fire.


The Fae have withdrawn themselves from the human world, or have they? Some old and not so very nice Fae have been set free to wreak havoc amongst the humans, a warning that the Fae are not harmless nor helpless. When Charles and Anna set out to visit some old friends from Charles who own a horse farm, to buy a horse for Anna, they find themselves in the midst of things.
Joseph is one of the few true friends Charles has, and still he hasn’t seen him and his wife Maggie for twenty years. Charles wants to change Joseph into a werewolf, to prevent him from dying, as he is an old and sick man now, but Joseph refuses. His own father, Hosteen, is a werewolf, and the local alpha. His son Kage is working in the stables along with his grandfather.

An evil Fae is stealing children, leaving changelings in their place. And when Kage’s wife get bespelled by it, it is up to Charles and Anna to put a stop to it. By endangering the family of a werewolf, they are no longer bound by the treaty between the Fae and the Marrok. But never could they guess the horrors they would see.


An awesome story yet again. I have to admit, the looking for a horse for Anna in between the detective work became a bit tiresome, as I am just not that into horses, and a lot of the special horse language is like math for me: above my head and not all that interesting. But it gave them some rest, and some quiet together time after the horrors of the day, and that was nice. I really liked Chelsea, Kage’s wife, and I think she will be giving Hosteen some trouble in the future.

I am anxious to find out more about the almost war between the Fae and the humans, and what will happen next. There are so many possibilities but Patricia Briggs always manages to surprise me with her stories, and I love that.
I really enjoy this series with Anna and her Charles, but I do prefer the Mercy series, sorry Karin.