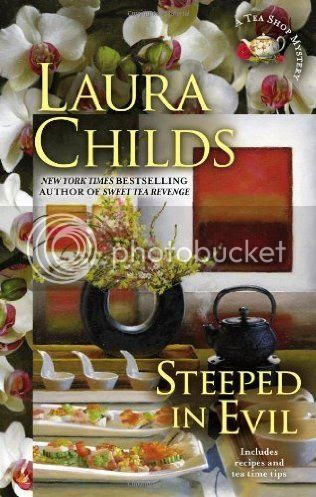 Theodosia Browning has never considered herself a wine connoisseur - tea has always been well, her cup of tea. But that doesn't mean she's going to pass up an invitation to a fancy wine-tasting party at the upscale Knighthall Winery, just outside of Charleston, South Carolina.
Unfortunately, a sweet evening takes on a bitter aftertaste when a dead body is discovered in one of the wine barrels. The son of proprietor Jordan Knight has been murdered.
Dissatisfied with the police investigation, Knight turns to Theo for help. She's heard through the grapevine that there are both family and business problems at Knighthall. They say in vino veritas, but everyone at the winery seems to be lying through their teeth. Sorting through the guest list as well as family and staff, Theo has her pick of suspects. It may look like the killer has her over a barrel, but cracking tough cases is vintage Theodosia Browning.


I’ve been reading this series since the first book appeared in 2001, drawn to the beautiful cover. The covers are all gorgeous and inviting, and the mysteries are good and difficult to figure out ahead of time, and I love all of them. This is book 15, and I am still not bored with Theodosia and the secondary characters in this book.

There is Hailey, the pastry chef of The Indigo Teashop, who creates little delicious miracles every day, using fresh ingredients and tea in her sandwiches. And Drayton, the master tea blender, an elegant elderly gentleman complete with bow tie, who knows everything there is to know about tea. He loves to share his knowledge, and he is a favourite of their clients. Delaine Dish is a neighbour, who owns a very upscale clothing store. She is always after Theodosia to buy something new, and “volunteer” her services at the next charity she is championing. Delaine has great fashion sense, but a louse taste in men as she always seems to fall for the bad guy in the story. So yes, her being interested in a new man, immediately turns him into a suspect in my eyes.

Theodosia has lots of friends and acquaintances who keep appearing in the series, and she has had a few love interests over the years as well. Most of them have died though, or moved away from Charleston. I am not a fan of her current one though, as he doesn’t like her snooping around at all. I want my heroine to be encouraged and backed up by the man in her live, not held back. I want her to be able to share her investigation with him, and not having to lie about it, keeping her actions hidden.

The current mystery at the winery was not an easy one to solve. So many possibilities to choose from. The almost ex-wife who inherits the son’s shares, so she gains control over the winery. Perhaps his drugs supplier, or the friend who is driving around in his expensive Porsche. A rival winery owner, or the next door golf course, who both want to buy the land the winery is on. The grief stricken father seems to be the only one who wants the true killer to be found, and even he is lying to Theodosia.


A great addition to the series, and a good mystery I had trouble figuring out. But I had fun reading it, and I could picture myself walking through Charleston with Theodosia and her beloved dog Earl Grey. Laura Childs is an expert in describing the atmosphere, the plants, the houses, the people, everything. I wish I could visit the Indigo Tea Shop myself, and sample everything.