The fourth book in the Books by the Bay Mystery series, published November 6, 2012.
Genre: cozy mystery
Cover: Love it 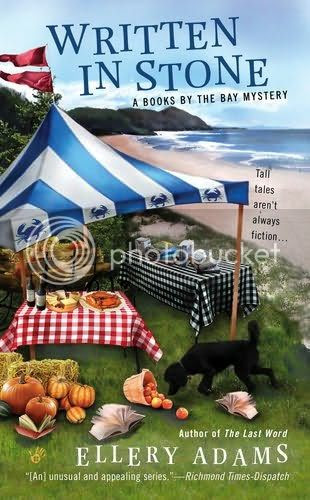 When Munin Cooper, known as the Witch of Oyster Bay, warns Olivia Limoges that death is coming, neither of them realize that it is the older woman herself who will soon be found dead. And Olivia's instincts tell her that something - or someone - more sinister than a mystical force is at play...

Olivia has a lot on her plate preparing for the Coastal Carolina Food Festival. When she hears the news of Munin's untimely death, however, finding the murderer takes priority. The witch left behind a memory jug full of keepsakes that Olivia knows must point to the killer - but she's got to figure out what they mean.
With handsome Police Chief Rawlings by her side, Olivia starts to identify some of the jug's mysterious contents - and finds its secrets are much darker than she suspected. Now Olivia must enlist the help of the Bayside Book Writers to solve the puzzle behind the piece of pottery and put an end to a vengeful killer before any more damage can be done...


I was very much looking forward to reading the new book in this series, as it is an exceptional good cozy mystery series. And it starts with a lot of action.

Olivia Limoges is having a nice breakfast at Oyster Bay’s local diner, as she does almost every day, with her big black poodle Captain Haviland. The diner is decorated in Andrew Lloyd Weber paraphernalia, there are boots with a Cats theme, a Phantom of the Opera theme, and many more. Dixie, the proprietor on rollerblades, tells Olivia, that the local witch has asked for her. At first Olivia is sceptic, there is not such thing as witches, but the locals sure have believed in this Munin for many decades now. Munin claims to have something for Olivia, something that used to belong to her mother.

Leaving the diner, Olivia witnesses two obnoxious tourists. The man doesn’t even hold the door for his companion, who has to be his mistress, as Dixie saw the picture of his wife and kids in his wallet. With a vanity plate saying NipTuck, the man has to be a doctor. He drives a bright orange Corvette, and Olivia gets more and more irritated with the couple. And what she does, when it gets too much, go Olivia!
I absolutely loved that scene in the book! I was cheering for Olivia!

Olivia decides to visit the witch after all. But to find a local fisherman who will ferry her over is not easy. But one of them is willing to bring her, he is the witch’ messenger, and he does her shopping for her, whatever she cannot grow herself, and especially to bring her newspapers. The visit is not without danger, that part of the swamp is crowded will all kinds of poisonous snakes, so Olivia is thankful that her guide is careful enough to test the high grass with his walking stick first. He is a retired park ranger, and Munin saved his life some years ago, when he was bitten by a snake.

Olivia leaves Munin with more questions than she had before, and a memory jug the witch has made for her, embedded within the clay is her mother’s starfish pendant. And some other treasures Olivia will have to find out about. She will need the help of her “boyfriend”, Chief Rawlings and the other Bayside Book Writers for that. But Olivia could not know the old secrets they would unearth. Nor that Munin would be killed the next day.

Back at her restaurant, The Boot Top, her chef Michel is elated when he tells her the restaurant has been chosen for a segment on the Food Network! He longs for the fame it will bring him, as his long time nemesis has been taken out of the race. Due to his pendant of falling in love with married ladies, he never got famous and working in the biggest restaurants. But he likes where he is now, and he has free reign in the kitchen.
Olivia is not really happy with it, having a tv crew disturb her restaurant and kitchen, but for Michel’s sake she agrees to it. But when the director is quite taken with one of his sous-chefs, a native Lumbee Indian, Michel is jealous. He even threatens the boy, and the camera team catches it on film. Still, they are all really impressed with Michels artwork.
Olivia and Michel have also been invited to be two of the judges at a food contest next weekend. during the Coastal Carolina Food Festival. Cooks in the wild, where the chefs have to cook in primitive conditions, and can only use the ingredients provided for them to come up with something delicious. Michel is very excited he is going to meet one of his first loves again, who happens to be a lovely pastry and desert chef, and the third judge.

And after that, her sous chef Willis, dressed in historical Lumbee clothes, cooks some traditional foods on a campfire. And again. Michel is filled with jealousy for the boy. Willis’ sister Talley is a talented storyteller, and Olivia really enjoys her tale. But then Willis gets very ill, and he dies before the ambulance can get him to the hospital. What could have happened? He was just a boy!


Okay, I may have told much too much already, but so much happens in this book. It is fast paced, but still has time for some nice developments between Olivia and her Chief. They are growing closer together, but there is no rush, just love and affection between them, and of course Haviland.
Millay and Harris are also still involved, and Harris is really growing up now. Millay’s book is finished, and it is time to start the dreaded next step, getting attention from an agent.
Laurel is working for the local newspaper, and she is interviewing the old Lumbee, trying to find out what they remember of the battle against the KKK. Will they find out the truth in time to safe Talley? Millais is especially upset and taking care of Talley, having been a victim of prejudice in her childhood as well. Can it be possible the Klan is behind this all?

I really love the way Ellery Adams tells a story. I was convinced that Michel would be arrested for poisoning Willis, but that was not the case. Instead, he is over his crush on Laurel, and happy with his old flame, who might even be settling down in Oyster Bay. The part about the memory jug is very interesting, as is the lore about the Lumbee Indians and the KKK. I enjoyed reading about this.

And then there is another surprising plotline. Involving Olivia, her brother, and her father. Was Munin right on that as well?

If you like cozy mysteries, I really do recommend this series. But do start with the first one, not for the mystery part, but for the development of the friendships and personalities in the series.