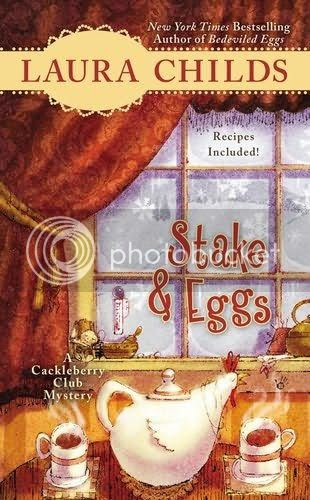 New York Times bestselling author Laura Childs presents the best way to start your day - with a hearty breakfast and a side of hard-boiled murder.

Suzanne, Toni, and Petra found a second life after losing their husbands - opening their own successful business, the Cackleberry Club café. But the three women never expected sleuthing to be the special of the day...

A killer has the town walking on egg shells.

When a snowmobile crashes into the woods behind the Cackleberry Club café, Suzanne finds her town's most-hated banker beheaded by a wire staked in the snow. Now some of her best customers are prime suspects with a bushel of motives, and the murder investigation is snowballing. An elusive young runaway may be the Cackleberry Club's only way to crack the case...provided Suzanne can keep her head long enough to track down the cold-blooded killer.


After losing her husband 10 months ago, Suzanne had to decide what to do with her future. Her husband was a country doctor, and they had a good life together, but now she is alone, no children, and not even 50. So, together with her two best friends Petra and Toni, who can’t be more different from each other, they converted an old tank station into the Cackleberry Club, where people can have breakfast, lunch and tea. Eggs are their speciality dishes. Petra is the chef, Toni is the waitress, and Suzanne does everything else. They have also added a BookNook to the place, where people can buy books, and a Knitting Nest, for Petra and her knitting friends, and where they sell all kinds of knitting items.
Fresh produce made by locals is also for sale, and used in the kitchen. They are doing well, so close to Highway 65.
Suzanne is a widow, Petra’s husband is suffering badly from Alzheimer and is in a nursery home, and Toni, who looks like the eternal teenager, is married to a deadbeat man. He can’t keep a job, and is always looking for the next scheme to make some easy money.

The ladies are getting ready for the Fire and Ice Festival, that will start the next day, and they will be hosting the Winter’s Blaze this Sunday. Toni is excited about the treasure hunt, which has a grand prize of $ 3.000,00 and she sure can use that money. But is she really ready to divorce her deadbeat husband Junior this time?

They are waiting for the banker, Ben Busacker, the new president of the Kindred State Bank, to come over and discuss the plans with. Ben is not very popular around Kindred, as he has a zero tolerance policy. If you are behind on your payments, you will be foreclosed on, nor is he very forthcoming with loans for small businesses. But Suzanne doesn’t have much difficulty with the man. Then they hear a loud noise, one of those infernal snowmobiles is coming their way, or perhaps two. And then it sounds like it is crashing somewhere, and Suzanne sets out into the snowstorm to find out what happened. But she is not prepared for what she sees. The snowmobile is crashed into her shed, and the driver did not survive it in one piece. He is most certainly dead, thanks to some wire spanned over the trail.

Sheriff Doogie arrives fast, and has his work cut out for him. Too many suspects, as almost no one liked the victim. Among them, one of Suzanne’s neighbours, a man who would not hurt a fly. How can Doogie think he did it? Another farmer is openly glad that Ben is dead, but did he kill him? And who will be the new bankmanager? Ben’s boss from headquarters’ sure is a nasty piece of work. Will he really appoint the fired prison manager? If that happens, then the ladies of the Cackleberry Club will for sure go banking elsewhere.

And so, amongst the many events of the Fire and Ice Festival, a killer is still at the loose. And is he really trying to stop Suzanne from sleuthing by killing her? Luckily, Suzanne has her new boyfriend Sam to be comforted by, and her two little dogs.


I always look forward to the next Laura Childs book, and this is the third of the cozy mystery series she writes. I have to admit, no matter how good this is, I still love her Teashop and her Scrapbooking mysteries better. Although I really can relate to the ladies of the Cackleberry Club, as I am approaching their age, and their difficulties in life they have to overcome.

The mystery was not one I could solve before it was revealed in the book, I honestly did not have a clue who the killer was. I just went along for the road, and enjoyed it a lot. I would certainly like to visit this Fire and Ice Festival, even though it sounds like a very cold town in winter, it is somewhere in the Midwest. Minnesota perhaps?
I enjoy Laura Childs writing style a lot, it is very fluent, easy to read, and I am totally captivated by her stories. They are just plain fun to read, and also resemble reality, with today’s economic crises and all the difficulties the ordinary people are facing.