The fifth book in the Elder Races series, published November 6, 2012.
Genre: paranormal romance
Cover: very nice, and with a stepcover. 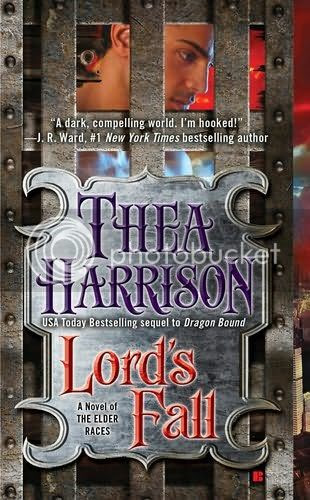 In the latest Novel of the Elder Races, two mates find themselves on different paths, torn between their duty to the Wyr and the passion that binds them...

Before she met Dragos, half-human/half-Wyr Pia Giovanni was alone and on the run. Now she's mated, pregnant and heading south to repair the Wyrs' frayed relationship with the Elves. Being separated from Dragos is painful, but for the good of the Wyr demesne they need to figure out how to be partners - in more places than just the bedroom.

In New York to preside over the Sentinel Games, Dragos is worried about his mate, but knows that finding two replacement sentinels is essential to show the rest of the Elder Races just how strong and brutal the Wyr demesne can be. But as the Games heat up, Pia's negotiations with the Elves take a turn for the dangerous, straining her bond with Dragos and threatening everything they hold dear...


In the last half year, Dragos Cuelebre has lost two of his Sentinels, and he has decided to replace them, by holding Games. The 7 strongest warriors will become his new Sentinels. The 5 Sentinels left over get the choice: retire honourably after so many thousand years of service, or join the games. All of the Wyr in the world can join, but only those deemed good enough, both in strength and in loyalty to the Wyr will be invited to fight. 446 warriors will fight one week long, if you lose, you are out of the games.
In the meanwhile, Pia will travel to the Elven demesne, to try to make peace with them on behalve of Dragos, and have the trade embargo lifted. Among this rotten economy, it is really hurting a lot of New York businesses. The Elves may hate Dragos, but they love Pia, and knew her mother, and the truth about her. The Wyr think it very strange that Pia has not revealed what kind of Wyr she is, and they have become suspicious of her. Like the security detail that is to take care of her. Pia will have to get them on her side, and fast, or the whole trip will be wasted. She needs to be in command of the situation in front of the Elves.

Dragos is not happy leaving Pia out of his sight, she is his mate, she belongs with him, but the truce is needed, and his attention is divided enough as it is already. When he sees Rune and Carling at the games, he doesn’t know how to react. Rune has been with him for many millennia, his right hand man, until he met Carling, and mated with her. Dragos knows he reacted badly back then, and he has no clue how to make his piece with Rune. He does know things cannot go back as to how they were, even if Rune would come back to work for him, he cannot be the First Sentinel again. So, in his stead, Dragos decides to choose Gray for the job. Pia likes him too, and trusts him, and that is enough for now.

The Harpy Aryal is the next one who disturbs him. She has found out that Pia’s friend and former boss Quentin Caeravorn is entering the Games, that he is part Wyr. She hates his guts, is convinced he is a criminal even though she hasn’t find any evidence to that in the past two years she has spend investigating him. But the law is the law, and Quentin has every right to participate in the Games. Another interesting contender is a Pegasus. A normally peaceful Wyr, this one knows how to fight, and it would be very interesting if he became a Sentinel.

But Pia is not safe in the Elven demesne, when they travel into the sentient Woods to meet the Elven Lord. And when Dragos cannot contact her any more, he ignores the rules and enters Elven Land again, to find her and bring her back home with him. An ancient enemy has surfaced again, and for the very first time, Dragos and the Elves will have to fight together to have a chance of survival. As the Oracle predicted last year …


I really loved this book, and still believe that Thea Harrison’s work gets better and better with each book. And I know I am in the minority with those believes. I did not really fall for Pia in the first book, but in this one, she holds her own. She knows what is necessary, and she goes for it, and against Dragos when necessary. I admired her for that. She doesn’t like being distrusted by the Wyr, but she is pregnant with “Peanut” and that has to be more important.
The intrigue was very well written, and I could not guess where it all would end. But I enjoyed every page of this book, and heartily recommend this story to all lovers of paranormal romance / romantic fantasy. Thea Harrison has created a unique world, mixed into our own, and her characters are diverse and totally alive. You cannot help but to fall for them.