The third book in the Arcadia Bell series, to be published May 28, 2013.
Genre: urban fantasy
Cover: lovely and totally fitting the story. 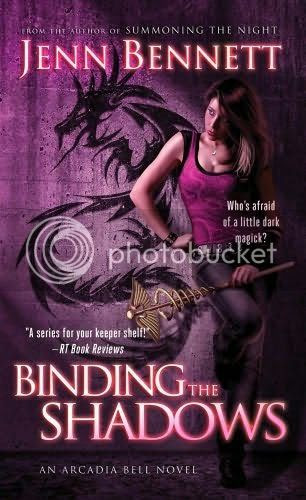 In the third book in this beloved and "riveting" (Romantic Times) urban fantasy series, demon-friendly tiki bar owner Arcadia Bell discovers more about her own evolving, and possibly destructive, magical abilities when her bar is the target of a demonic crime wave.

Renegade mage and bartender Cady Bell has had a rough year, but now the door to her already unstable world is coming completely unhinged.
When a citywide crime wave erupts, Cady's demon-friendly tiki bar is robbed by Earthbounds wielding surreal demonic abilities that shouldn't exist.
With the help of her devilishly delicious boyfriend, Lon Butler, Cady sets out to find the people who wronged her. But the criminals aren't the only ones experiencing unnatural metamorphoses - Cady's own Moon Child abilities are evolving beyond her control.
Can Cady track down the monsters responsible before the monster inside destroys everything - and everyone - she loves?


I am sitting here, staring at a blank page, and have no idea how to write this review without spoiling anything for you. I was captivated by this story, and all the things that happen to Cady. And in the end, the book just stopped, and I went: nooo it cannot be the last page!!? So a warning, major cliffhanger, and you really just want to read on and find out what happens next. But I will try to write something of a review.

The book starts with Cady and Lon investigating the strange new and superstrong powers of one of Lon´s fellow members of the Hellfire club, who really should not be that strong at all. But Merrimoth is almost succeeding in killing them, and Cady has no choice but to use her Moon Child powers to safe Lon. But something is not right, and she even gets a vision of her mother!
Dare is furious with them for getting the man killed, and Cady is just fed up with him. She know she is like a father to Lon, but she refuses to be blackmailed by him any longer, and do his dirty work for her. She quits. And if he wants to turn her into the cops, she knows some things about him they will be interested in as well. Lon is upset with Cady about not telling him Dare is blackmailing him, but he supports her decision. Cady sure did make an enemy today, if the man wasn’t one already.

The next evening at her pub, the Tambuku Tiki Lounge, Cady is prepared to tell Kar Yee the truth about herself, but then two young Earthbounds enter. With painted faces to camouflage themselves, they throw paint over the wards and somehow shortcircuit the electricity, so Cady cannot trap them, and with unusually strong knacks they take the till. Kar Yee gets two broken collar bones when she slips on the paint, and as she uses her knack of fear, even Cady cannot fight it and the boys, and has to see them flee the premises with their money. Kar Yee has to go to the hospital and Bob, one of their regulars and a healer, goes with her to make sure they threat her right. While Cady has to stay back and deal with the police and the mess.

When Cady finds out, their place was not the only one robbed by strong Earthbounds, she and Lon set out to investigate. And when they get the clue that a new drug is involved, they need the help of their favourite drug dealer: Hajo. Lon is so not happy with that, but they have no choice if they want to prevent more crimes and perhaps deaths.

A top of all this, Cady has to deal with Lon’s inlaws. His former mother in law, and sister in law are visiting, as they are still very close to Lon and Jupe. And it does not appear as though she gets accepted into the family; Rose even wants her to spend the night in her own apartment instead of in Lon’s bed. She does not condone people living together without marriage! Cady is hurt, but for Jupe's sake, she will comply.

Every time Cady uses her Moon Child powers, something seems to go wrong, and when she finds out that her mother is not dead but instead getting more and more powerful in the Aether, she gets afraid. Her mother can get to her when she is asleep, or hurt, and she is really afraid of what is happening to her. She is changing into something …


As written earlier, this story is great. Filled with emotion, action, magic and discovery, it kept me glued to my computer. And as soon as I read the last words and got over the shock, and dried my tears, I tweeted to Jenn Bennett how evil she is, but also how awesome. I really wish I did not have to wait so long for the next book.
The things Cady has to go through in this book are not easy, but her relationship with Lon and Jupe keeps growing as well, and that was very nice to witness.

I heartily recommend this series to all lovers of urban fantasy or paranormal romance.