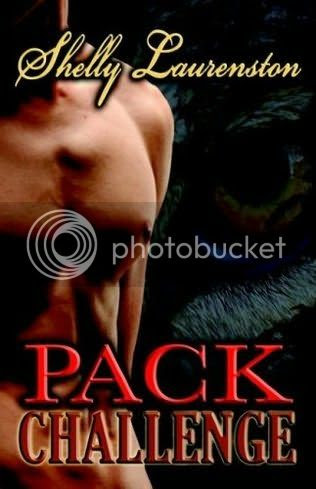 What's an Alpha Male to do when he meets the Alpha Female of his dreams? Step one, hide all sharp objects...

All Zach Sheridan ever wanted was to become Alpha Male of his Pack and be left alone. What he definitely didn't need in his life was some needy female demanding his attention. What he never saw coming was the vicious, scarred female who not only demanded his attention but knew exactly how to get it.
Sara Morrighan knew this was the best she could expect from her life. Good friends. A nice place to live. And a safe job. But when Zach rode into her small Texas town with his motorcycle club, Sara knew she wanted more. She knew she wanted him.
But after one sexy encounter with her dream biker, everything is starting to change. Her body. Her strength. That new thing she's doing with the snarling. Even her best friends are starting to wonder what's going on with her.
But this is only the beginning. Sara's about to find out her life was meant for so much more. And Zach's about to find true love with the one woman who makes him absolutely insane.


Zach Sheridan is on a mission: to find Sara Morrighan and tell her about her heritage. And to that end he and his pack have come to the little town in Texas, were Sara was raised by her grandmother. And under the protection of Merrick, but Sara doesn’t know that.

Sara Morrighan has been raised by her grandmother when her parents were killed while camping. Or so she was told. Sara was found with some major wounds on her leg and her face, but she survived, though she has some major scars. And lately, especially her leg has been paining her. To the point where she passes out.
Her grandmother was a cruel woman, always punishing her and belittling her, and she is glad the harridan died 6 months ago. If not for her two good friends Angelica and Miki, she would not have made it. Sure, they fight all the time, but they are close friends and depend on each other. Miki is a genius, and paranoia to the extreme, while Angelica is gorgeous and love to make men insane with lust for her, and then just walk away. Sara is not used to male attention, they are put of by her scars, or by Merrick and his family.
Sara works for Merrick in his bike shop, Miki is the local barrista and studying for her next doctorate, and Angelica has her own fashion boutiques. They could not be more different.

But this Zach is different, he does not even see Angelica, he focuses completely on Sara. And she feels an instant attraction whenever he is near. So when they are invited to a rave the bikers are throwing, they are intent on going. Sara secretly is convinced she is dying, and she will have one fling before that happens.

But Zach knows what is wrong with Sara, the lionshifters (pride) that killed her parents, are know to poison their claws, to make their victims suffer. And that poison has slowly been killing Sara. Merrick never got the chance to take Sara to a hospital to take care of it, as her grandmother poisoned her mind against doctors and hospitals, and the girl just needs to bleed the poison out. So while making out with Sara, he takes care of that problem, and uses his claws on her leg. To say she is surprised by what he is doing to her is an understatement, but the next day, she is even walking without a limp. The changes in her body are instantaneous, and she needs some answers …


I enjoyed this fast paced novel, and the different types of shifters I was introduced to. Zach did not want a mate, but he did want to be alpha of his pack. His current alpha made a bad choice of mate, and it has weakened him. Zach is ready to take over.
But when he laid eyes on Sara, he knew she was his, and he would protect her, and have her as his mate, no matter what. But Sara is not a sweet little lady, she is a bitch herself, and fully capable of handling and defending herself, as he witnesses firsthand that day at the bar. She doesn’t take shit from anybody, and especially not from the alpha female of the pack. This is important, as she is to be the new alpha female. I did love those scenes a lot.
Sara has to be told everything about the world of shifters, and the different races, who are all predators. But she still insists there could be bunny shifters too. To the exasperation of her mate, but I think it is funny.

There is a lot of humor in this book, lots of action and fighting, and even more sex. Lots of cursing too. Still, I liked the three friends a lot, and did in fact read all three books the same day.

And one thing really stands out to me: neither Zach nor Sara ever wants to have kids, and in the next book, they even get themselves “fixed”. That is for me a first in an American book, because those oldfashioned family ideals are always at the core of every romance novel I have ever read. I like that in particular as I also never wanted to have kids myself. I am a stepmother now, but well, that was a package deal.