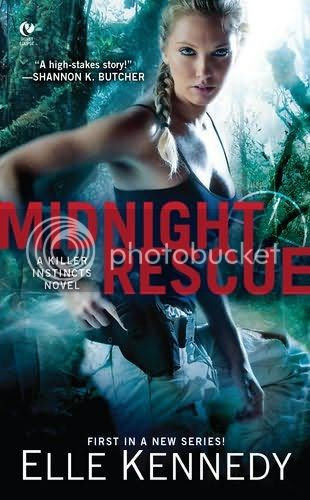 Abby Sinclair had a desperate childhood until she was rescued and adopted by a retired army ranger who molded her into a master of self-defense. Now, she's a cunning and fearless assassin thrust into assignment after dangerous assignment, using everything she has-nerve, resilience, strength, sex-to come out on top. Her only rule: trust no one.
Abby's latest assignment is in Columbia. She needs to go undercover and snuff out a dangerous arms dealer active in the underground sex trade. But when Abby purposely blows her cover in a last-ditch attempt to free the helpless victims, deadly mercenary Kane Woodland is recruited as back-up. His mission: get Abby out of that hell hole.
The last thing Kane expects is to feel a primal attraction for Abby. But when she convinces him to join her on her perilous mission, their newfound passion could put the lives of their whole team at risk.


Abby Sinclair has a mission: get close to Columbian crime lord Blanco and kill him. She is a highly trained assassin and chameleon, and has no trouble getting Blanco’s attention and becoming his new mistress. But when she finds out he is selling young girls as sex slaves, she has to postpone the job in order as she wants to safe the girls. And for that, she has to blow her cover. Getting tortured is nothing new to Abby, as she has had a really bad childhood. Until Jeremy saved her from the foster“father” who abused her for years. He trained her to defend herself, and Abby became an expert in the martial arts.
Still, Blanco’s pet psychopath Devlin can’t break her, no matter what he does to her. And when he finally tries to subdue her through rape, she gouges out his eye. Shortly after that, she is rescued, broken and bloody, by Kane Woodland and his team or private trouble shooters. Her boss, Noelle, was worried when she did not check in as scheduled, and hired Jim Morgan and his men to rescue her. As Morgan only hired the best men from each branch of the service after they “retired”, they are the best at what they do.

But Abby does not want to be rescued, not without the girls! Still, there is nothing she can do about it, but convince her rescuers to go back for the girls. And it takes a lot of convincing them to do that. They have lost the element of surprise already, and Blanco will for sure have doubled his security at the least. And Abby herself cannot be part of the mission, as she is a liability with her broken wrist and hurt ribs. This means they need to bring in Isabel, another collegue and friend of Abby’s and Trevor, one of Kane’s teammembers. They both have solid aliases and will have to act as buyers. They should have no problem to work together, if not Trevor has a deathwish, ever since his fiancée died in a burglary of their Aspen condo. And being attracted to Isabel, makes him feel even more guilty.

Abby is safe and recuperating at Morgan’s hidden compound in Mexico, and doing her best to get in on the action. If she cannot join in the rescue, she will for sure help with the planning, and make sure every team member knows it all by heart. Not every team member likes her presence in the house though, D certainly doesn’t trust her. But Kane is the boss when Morgan is gone for business, and he wants her to stay put. And in his bed if possible. He wants to teach her what sex can be, when two adults are attracted to each other. Abby never has had sex because of desire, for her it is just part of the job, she doesn’t feel anything. Kane is not the kind of man who wants a relationship, but there is something about Abby. Even beneath all the wounds and bruises she is a beautiful woman, and he wants her.

And then Devlin figures out who stole Abby out of his prison, and he starts calling her. Threatening her therapist if she doesn’t take his calls. Devlin sure knows how to poke her emotional wounds, and he takes great pleasure into doing so. Kane hates it that Abby won’t just disconnect the calls, but he can’t do anything about it. Abby will have to defeat Devlin on her own terms, and she is totally capable of doing so.


I have to admit, I did not really like this book. I have been on the verge of DNF’íng it a few times. The suspense part of the book was not a very original plot, but that often doesn’t bother me. It is the execution of the action that makes a book good. But in this case I just did not like it. At first, I liked Abby as a kick ass assassin, but her interaction with Kane made her weak. He keeps pushing her for sex, even after he knows about her past and her bad experiences. And I really, really dislike that. He could have handled it more easygoing, giving her more time to get used to feelings. He gets angry when she says no, and that is not a hero thing in my eyes. Why would she trust him, she doesn’t know him!
And then when Kane goes after Abby, which should have been totally unnecessary. I was hoping for a really different outcome of the encounter. Kane was a real jerk.
And then the second sort of romance story between Isabel and Trevor. I liked Isabel, she is great at what she does, she saves Trevor’s bacon a few times by her actions, and he is just a big boar. Still grieving, feeling guilty for not being there but on a mission, and he really does want to die. He won’t take his own life because of his mother and sister, but he thinks it is allright if the bad guys kill him? Feeling guilty for feeling something for Isabel, that I can understand, but getting angry at her about it? Grow a pair and get over it.

So, I did like some parts of the books, but are totally unimpressed with most of it. There were no surprises at all for me. A standard rescue plot, no suspense or thrill at all, and characters I really dislike. Lots of violence and sexscenes.
But, this is my personal opinion of course. This does not mean the book is not well written, as it is. It is nicely paced, but this voice is just not for me. I want a bit more suspense, and less sex scenes. I want to be surprised by even a minor twist, and I do have to like the main characters. Preferably even fall for the hero because of his character and his actions. And for me, Kane is no hero.