The first book in the League of the Black Swan series, published May 7, 2013.
Genre: urban fantasy
Cover: nice 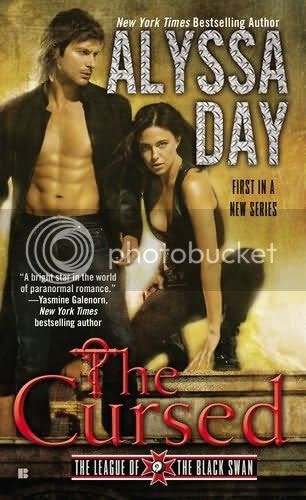 New York Times bestselling author Alyssa Day returns with a thrilling new series of paranormal romance and a heated battle between good and evil fought to the death on the streets of New York...
Bordertown private investigator Luke Oliver's beat is the dimensional fold in Manhattan between the human and supernatural realms. But now a secret from his past - the League of the Black Swan - has surfaced. Because Luke isn't any ordinary P.I. He's the Dark Wizard of Bordertown, and he never backs down from a fight.
But this time the fight threatens his life and his heart. Rio Jones, the only woman he’s ever loved, needs his help against a deadly menace. Luke pushed her away once before, so she'd never fall prey to the curse that threatens to destroy him. He swore he'd never let her go again.
Luke and Rio, with the help of the newly re-formed League, must keep evil forces from taking over Bordertown - all the while battling a passion on the razor's edge between danger and desire. And it’s going to take everything they have just to stay alive.


Luke Oliver is minding his own business in Bordertown, when he gets a surprise visit from an old friend. And a knife in his stomach to see if he has turned evil already. He never expected to hear from the Black Swan again. And now they want him to find the one woman who has captured his attention in centuries. In order to keep her safe, he has to find out what they want with her.

Bordertown is a dimensional fold that lays hidden behind, beneath and between the streets of Manhattan. Bordertown is the Wild West, but the cowboys and outlaws of the typical frontier town are the demons and the Fae. Dangerous and deadly.

Rio is a bike messenger in Bordertown, living a quiet life, just as she likes it. But the day when she sees a powerful man kidnap a young girl, right off her bike, her life changes for good (or worse). Rio is a psychic; she can hear other people’s thoughts. And this man is just not human, and she sees that this man’s boss wants to use the girl for some dark ritual. Rio just can’t let that happen, she needs help to find and rescue the girl.
And there is only one man who can help her, Luke Oliver, the Dark Wizard. She sometimes brings him documents, and she is really attracted to Luke. But when she got the courage to ask him out for coffee, he turned her down flat. So needing his help now, will not be easy for Rio. Luckily she has saved up enough money to hire him.
But before Rio can find Luke, some other bad guys find her, and she needs to run. Right into Luke’s arms, who saves her from the Grendel. Unfortunately, he gets scratched and to his own surprise, he is susceptible to the Grendels’ poison, making him sort of drunk. Rio has no choice but to get him back to his office, and take care of Luke as best as she can.

When Luke is hired by a powerful Fae woman to find her missing niece, he puts two and two together, that Rio has witnessed the kidnapping of this little girl. Merelith drops a hint that she knows more about Rio’s past, and perhaps even knows her parents, but at the moment it is more important to find Elisabeth. According to Merelith, there is an ancient Pict King in town, and as he has not presented himself at court yet, his motives will be dubious.
Lucky for them, the man in question phones Luke, and asks him to retrieve the child his men “accidentally” took of the street.

Luke and Rio have no choice but to pick up little Elisabeth at Dalriata’s offices. And to make amends for what his henchmen did to Rio, he offers her a gift. And Rio picks a small red fox, chained to his desk, as the fox asks her to.


This book ended before I knew it, I could have read for a few more hours in this very intriguing world Alyssa Day has created. I am a big fan of worlds filled with lots of paranormal creatures from myths and legends and fairytales. The book is filled with lots of action, which I like, and Rio’s past is revealed slowly. All parties are interested in her, the Fae, the Demons, and the Order of the Black Swan. But unfortunately, the book ends before it reveals the full truth about Rio. So I am very anxious to get my hands on the next book.

I liked Rio. She seems to be a small human with an unimportant gift for mindreading, in a world filled with stronger immortals. She might be afraid, but she does what needs to be done, and she makes her own decisions. She really likes Luke, but she is not waiting for his approval or help, she has her own mind. She is not a typical kick ass heroine, but I think she will become one.
And then there is Luke. He sure has a colourful and painful past, which is why he pushed Rio away at first. But now she is his, and he won’t let her go again. He needs to see justice done, and he helps the underdog against the powerful when he can. He is a really great hero. And of course he is good looking too. His mother is one of my favourite historical powerful women.

I am really looking forward to the next book.