The first book in the Irish Hearts series, published in 1981.
Genre: contemporary romance
Cover: bland. I have a different one, but those books have been reprinted very often. 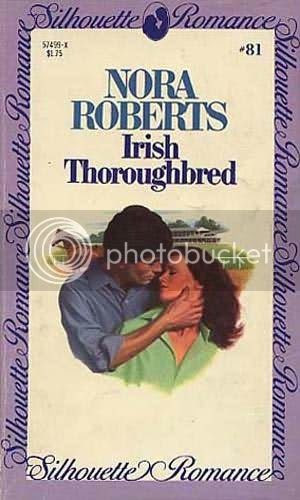 Adelia Cunnane: her hot temper set the heart of Travis Grant aflame. Now the proud, powerful owner of Royal Meadows horse farm is resolved to make this wild Irish Thoroughbred his own.


A few weeks ago, with my boyfriends help, I finally organized my stacks of unread Nora Roberts books. I divided them in series, and in stand alones, so now I can just pick up the first book and start reading, without having to search if this one if part of a series, or not. Irish Thoroughbred is one of the first, or perhaps the first, book that Nora Roberts wrote. But it did not really feel dated, I enjoyed it a lot.


Adelia Cunnane has lived on a small farm in Ireland her whole life. When her parents died in a car accident when she was young, her aunt came to take care of her and the farm. Even though she was never unkind to Adelia, there was also no read love showered on her. It was hard work. Now her aunt has died as well, and Adelia has to sell the farm to pay the taxes and such. She has only one living relative left, an uncle who went to America while she was a toddler. Adelia hardly remembers her uncle Paddy, but he has immediately invited her to come to America and live with him. Paddy works on a big horse farm, and he is sure he can find her a job as well. Although she doesn’t really have to work if she doesn’t want to.
Of course Adelia wants to work, she would not know what to do with herself otherwise. And she has a knack for working with animals, often having assisted the local vet with difficult births and wounded animals.
That first night she has a hard time sleeping, and so she sneaks down to go to the stables for a quiet chat with Majesty, the thoroughbred racing horse that captured her heart earlier that day. But before she can go inside, a hard hand lands on her shoulder, and she is questioned about what she is doing there. To her shock, it is the owner of the stables himself, Travis Grant, who was not supposed to come back home today. Thanks to her Irish accent, he soon recognizes her as little Dee, coming to visit her uncle Paddy, and not a horse thief or such.
But to think such a little pixie can handle his Majesty, that he has to see to believe first.

And soon Dee is Majesty’s main groom, she loves taking care of him and the other horses. And Travis sure takes a lot of interest in his new groom, even asking his own sister to take her shopping for some new clothes, something Dee is not accustomed to at all. But she loves the outing, and she loves Trish and her two little boys. Even though she has some homesickness at times, Dee loves life in America, and the wide green plains. And when Travis demands her to come with them when Majesty is racing, a whole new world opens up to her.

Travis has no idea how to make it clear that he is interested in her, until her uncle Paddy has a heart attack, and wants to see her provided for. Is it really a marriage of convenience, or do both of them want more than a sham?


I enjoyed this novel a lot. Of course Dee is painted as being very naïve, without any experience with men whatsoever. And as this is an 80’s novel, Travis is extremely bossy and alpha male. He could certainly have explained some things to Dee and stopped ordering her around so much. I liked Dee, and her fresh look on things, her excitement felt very real to me. There is not much background on Travis though, his actions tell about his character, not his past. But he does work hard himself as well, and is a success in his chosen field. I am looking forward to reading the next book in this series.