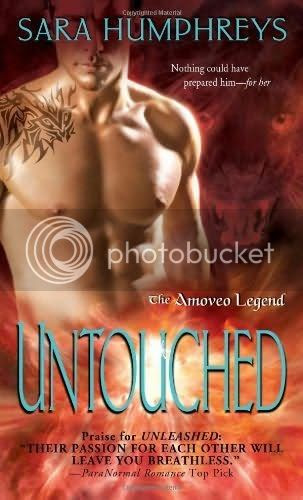 She should be seen, but never touched …
Kerry Smithson's modelling career ensures that she will be admired from afar, which is essential since mere human touch sparks blinding pain and terrifying visions.

Every good model needs a heavenly bodyguard …
Dante Coltari is hired to protect Kerry from those who know who she is - or more importantly what she is - and want her dead because of it. Nothing could have prepared him for the challenge of keeping her safe. But, strangely, his lightest touch brings her exquisite pleasure rather than pain, and Dante and Kerry have an otherworldly connection that might just pull them through.


Kerry has been having nightmares ever since her cousin tortured her to call her best friend Sam, so he could kill her. She feels so guilty for giving in, and she keeps seeing the strange eyes of the man who tried to rescue her. If only she had been brave enough to touch AJ, to see what he was up to. But touching people means visions and unbearable pain for Kerry. The only person she could touch without pain, was Sam. All she would see was a big, grey wolf. When ever her adoptive parents would touch her, she would cry out in pain. And the agony of that, made her life a very lonely life, without any affection from her parents.

Dante is very happy to have finally found his mate, even though she is not a full Amoveo shifter. Which is the reason he could not connect with her on the dream realm, she has such strong mental shields, get could not get through. But now he knows who she is, and proximity will help him. But how will he explain her heritage to Kerry, tell her who and more importantly, what she is? If she was raised as an Amoveo, she would know about the mating bond and gladly accept him. Now he has to woo her first, and gently introduce her to his world. If only they had the time for that, as someone is hunting Kerry …

Samantha and Malcolm are getting married, and Kerry is Sam’s maid of honor, and Dante is Malcolm’s best man. Dante thinks it is easy to get close to Kerry like that, as they are supposed to be dancing together, but Kerry turns him down flat. She doesn’t dance. How can she, if she cannot touch anyone? Still, she is attracted to Dante and keeps looking at him. But she knows the pain she will suffer, if he touches her, so she keeps avoiding him. Until that night, when she dreams of a big red fox. And when Dante arrives at her front door early the next morning, announcing that he is her body guard, hired by Sam and Malcolm, she is furious. But Kerry also knows she has no choice but to let him accompany her to the airport and her next modelling job in New Orleans.

But can Dante keep her safe, when her heritage is no longer a secret and a nutcase called “the Punisher” is after her?


I enjoyed this second book in the series. In the first book, we get to meet the world of the Amoveo, and learn alongside with Samantha about them. Now, Kerry gets told a bit more by Dante and by Sam, which I liked. Sam and Malcolm change their honeymoon plans to be there for Kerry, and then the men are send away for some girl time. Great scene.
I liked Kerry, who has been so very lonely for her whole life, and now there is this stranger she can actually touch. And speak telepathically to. Her life keeps changing, and she even finds out more about her real parents. The danger from the purists is still there, as they don’t know the people amongst them with those rigid beliefs. The Amoveo are dying as a species, if they cannot mate with humans with psychic powers, and their hybrid children.
I liked Dante as well. As soon as he realizes he will be Kerry’s first lover, he takes it slowly, even though the urge to just take her is huge. He needs to fulfil the mating bond in order to survive. But just being with Kerry makes his powers stronger.

I am looking forward to William’s story, he is a Gyrfalcon, and very rigid. I wonder what kind of woman will bring him to his knees.