Kevin Hearne – The Grimoire of the Lamb 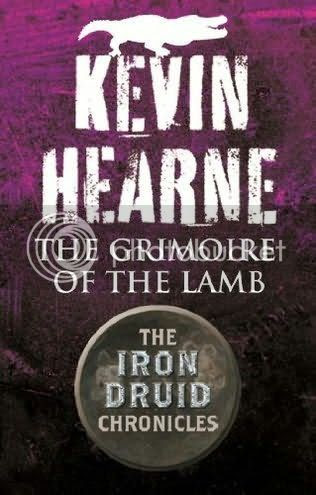 When he’s not vanquishing villainous gods or dodging demons, two-thousand-year-old Druid Atticus O’Sullivan can be found behind the counter of Third Eye Books and Herbs in modern-day Tempe, Arizona, literally minding his own business. But when an evil sorcerer—and amateur shoplifter—snatches an ancient Egyptian tome of black magic, The Grimoire of the Lamb, Atticus is not sheepish about pursuing him to the ends of the earth . . . or at least to the Land of the Pharaohs.
Unfortunately, Atticus already has enemies in Egypt—including cat goddess Bast, who wants her own book of mischief back from the Druid. In the streets of Cairo, she sends a feline phalanx after Atticus and his Irish wolfhound, Oberon. With fur still flying, Atticus must locate the sorcerer’s secret lair—where he will face killer crocodiles, spooky sarcophagi, and an ancient evil Egyptian who’s determined to order the sacrificial lamb special tonight.


I am not sure how to review this book, without spoiling something. The blurb (from Kevin Hearne’s site) tells so much already.

When some Egyptian magician tells Atticus that the ancient Grimoire he thinks is a cookbook for lamb, is actually written by Nebwenenef, the sorcerer who killed the Sahara elemental, causing it to be the desert it is today. It is filled with spells for power and to kill enemies, and it is too evil to excist. When the man counters Atticus’ magic and steals the book, Atticus has no choice but to go to Egypt and steal it back. If only the goddess Bast had not forbidden Atticus to ever come to Egypt again …

So Atticus has to face a few thousand cats intent on killing him unless he can talk Bast into letting him go, avoid a horde of crocodiles and fight some major evil. Lucky for him, he has brought Oberon with him to guard his back.


This novella is a fun peak into Atticus’ life before the series starts, and I enjoyed it. The bond between Atticus and his Irish hound is great; I do love their talks together, and how Oberon can talk Atticus into doing things he did not plan on doing. This little novella is filled with action and adventure, and I just love the wit and sarcasm.

If you have read the series, you know what I am writing about. If you are thinking of starting this series, this novella is a great try out if you like Kevin Hearne’s sense of humor.