Anne McCaffrey – The Dolphins of Pern

A book in the Renegades of Pern series, published September 6, 1994.
Genre: sci fi / fantasy
Cover: ugly, my own cover is so much more pretty. I have the white backed series by Corgi if you are interested. 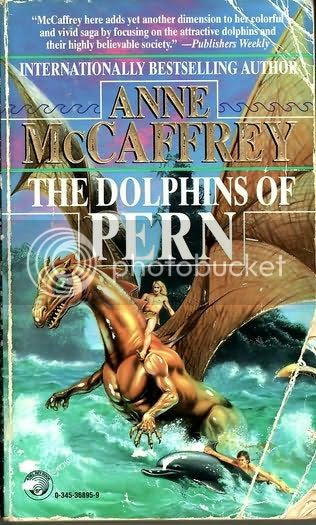 When Masterfisher Alemi took young Readis out to catch redfins for the evening feast, neither of them realised it heralded a new chapter in the history of Pern. For when a sudden black squall blew up, their mast splintered and broke and their boat capsized. It was the shipfish who saved them, swooping up from the deep, holding them firm above the water, guiding them back to land, and above all speaking to them.
Alemi, called to the all-encompassing power of AIVAS, learned that the shipfish were dolphins – brought to Pern with the early colonists to help and guide man through the oceans of the new planet. Now all the old Dolphin law had to be rediscovered.
Readis, fascinated by the many gifts of the dolphins – gifts unshared by any other creature on Pern – longed to work with them. Helped by T’Lion, the young dragonrider with his bronze Gadareth (who established his own particular friendship with the dolphins), Readis, fighting against vehement parental opposition, set out to become Pern’s first Dolphineer.


This book takes place years later than the Harper Hall trilogy. AIVAS has been discovered again at Landing, on the Southern continent. It has promised to help to rid the world of Thread forever, and is educating the population to its purposes. It needs to learn the specifics of the Dragons powers, and their bond with their riders, and it needs to bring the planet to a much higher technological level. Of course there are always people who are against improvement and change, and there is violence between both camps.

Still, one of the wonders to discover on Pern, are the shipfish. Of course all the fishers know it is bad luck to trap a shipfish in your nets, and there are many stories of them saving people from drowning. But to think they are intelligent and can talk? It is not until Alemi and young Readis get saved by shipfish, that they hear them talk and believe it. And AIVAS confirms what Alemi reports to him. The shipfish are dolphins, who came to Pern from earth, with the original colonists. To work alongside men in charting the oceans of this wondrous new planet, and tell the fishers where the best fish are swimming. To save people from drowning in storms, but they are also a very valuable tool for the Healer hall. With their sonar they can tell the Healers often what is wrong with a patient. So much knowledge has been lost, but many people refuse surgery, even if it will save their life, or that of their loved ones. Master Oldive has a long way to go to get his Masters and Journeymen to embrace the new knowledge AIVAS provides.

Readis is grateful to the dolphins for saving his life, and he is really interested in those creatures. They are so friendly, and they love the new contact with man. They never forgot their duties, even though men forgot about them. But his mother doesn’t want him to consort with them, she even blames them for the bad thorn he got in his foot, that nearly cost him his leg. And so Alemi builds a relationship with the Paradise River pod on his own, and they really help him with his fishing, telling where the schools are swimming, warning of bad weather, and even warning about invading ships from the North.

Other people are interested in the dolphins as well, like Master Fisher Idarolan himself, and he too has many hidebound masters under him who don’t want to believe that shipfish are intelligent and can talk. Talking is for humans, not for animals. But those that listen to him, and listen to the dolphins, improve their catches.

Bronze rider T’Lion is also very interested in the dolphins since he met them that first time with Alemi in Monaco Bay. Whenever he has some spare time, he spends it on the beach. His bronze dragon Gadareth likes the dolphins as well, they help him scrub his belly in the sea, and he enjoys the games they play.

But still, people don’t think dolphins as important as people, and when there are some badly injured ones after the big storm, it are TLion and Readis who take care of them, when the human healers don’t want to take the time. And they get in trouble for it as well. SO when Readis’ mother orders him to never see the dolphins again, he refuses. He has obeyed her for the last ten years, and has never been alone in the ocean with them. But now she has gone to far, he won’t promise, and that leaves him no other choice but to leave home. A few days further along the coast he finds some caves that are perfect for the first Dolphin Hall of Pern, and he sets out to provide for his own shelter and food, and a life jacket so he can swim with the dolphins.


Another of my favourite books by Anne McCaffrey, with lots of characters from previous books. Like Readis’ parents, and Alemi and Menolly, the Master Harper Robinton and firelizards. Still, the dolphins ad a great new species to the mix, more available to everyone than the firelizards and dragons as they bond to one specific human.
I love Anne McCaffrey’s writing style, she writes such lifelike characters, people you want to make friends with. I care for them, I cry with them and for them, and I am happy for them when they find their own place on Pern.

I think you can read this book as a stand alone, as there is a long prologue with explanations of this world in the front of the book.