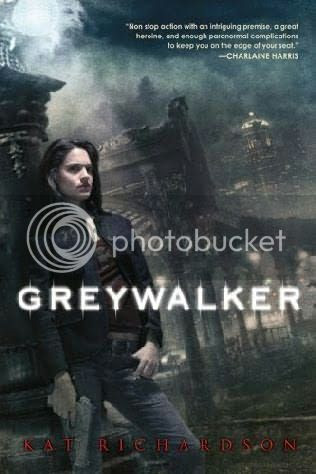 Harper Blaine was slogging along as a small-time P.I. when a two-bit perp's savage assault left her dead. For two minutes, to be precise.
When Harper comes to in the hospital, she begins to feel a bit ...strange. She sees things that can only be described as weird-shapes emerging from a foggy grey mist, snarling teeth, creatures roaring.
But Harper's not crazy. Her "death" has made her a Greywalker - able to move between our world and the mysterious, cross-over zone where things that go bump in the night exist. And her new gift (or curse) is about to drag her into that world of vampires and ghosts, magic and witches, necromancers and sinister artifacts. Whether she likes it or not.


I’ve had this book on my shelves for years now, and somehow, I never picked it up. But lately, a lot of people have reviewing the eight book in the series, claiming it to be one of the best there is, so I just had to start reading. I admit I had difficulty getting into the story, liking the main character. About halfway through, it finally grabbed me and then I read the rest of the book in one evening. So I am happy I kept on reading, on the advice of some readerfriends.

Harper Blaine is a PI who did not anticipated getting killed by the perp she was after. But he did manage to kill her, but she was revived in time. Only her life has not been normal since, and she has no idea what is happening to her.
When she complains to her brain doctor about the strange things she is seeing and hearing, and he finds nothing physically wrong with her, he sends her to a friend of his. And this couple does seem to know what she is talking about. There is another dimension connecting the normal world to a paranormal world, where the monsters live. It is called the Gray, and apparently, Harper is now a Graywalker, capable of entering that world.

Harper really does not want to be a Graywalker, she wants to be normal again, and finds it really difficult to believe what she hears. But Ben and Mara and their houseghost Albert really seam to know what they are talking about. Mara tries to teach Harper how to deal with it, but as Harper does not really want to, she is not very successful. As Mara is a witch, and not a Graywalker, she can only look into the Gray, not interact with it, so everything she and Ben are teaching Harper, is theory so far.

Harper has to work her cases as well. A strange foreign customer wants her to locate an old family heirloom, a parlor organ. And through some excellent sleuthing, Harper manages to locate it. But something is very wrong with it ... and with her customer.
A desperate mother has hired her to find her son, and when Harper does, her world just gets more and more strange. Cameron has been made a vampire against his will, and now his maker has tossed him out on the streets, without teaching him how to be vampire. Harper’s new job is to make Edward take Cameron back, but Edward is way more powerful than she imagined. And Harper keeps meeting more and more dangerous people.

She will have to learn the ropes of this new world fast, or die or worse…

But not all is bad, through her investigation of the organ, she also meets an auctioneer she likes very much, but can Will handle the strangeness that is her life? And the guy who sets her up with a fancy new alarm system after two tugs trash her office, seems to be pretty interested in her as well. Quinton is a bit strange himself, but very good at what he does. And he knows about vampires.


A very strange, confusing tale, it took me awhile to start to like it. Harper fights who and what she has become, but also wants to help her clients. She has signed a contract, and she will honor it. I really did like Ben and Mara, and how they are happy to help Harper. Being a Graywalker means that Harper will get sucked into strange cases more and more, as the ghosts and other beings are attracted to her. To them, she is radiant. I liked to be with Harper on her journey of finding out about herself and her supposed powers. She is not suddenly all powerful, she has to learn what she can do, and how. But she is also stubborn and does not give up, and I like that about her.
Will is a love interest for a little while, but I am more interested in the strange Quinton.

This story is a bit darker than my usual Urban Fantasy, but I came to enjoy it and will certainly read more of the books.