Julie Hyzy – Hail to the Chef 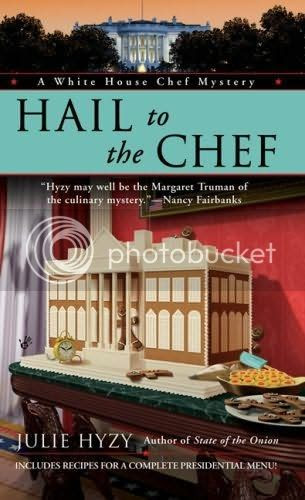 White House executive chef Ollie Paras has a lot on her plate, what with holiday meals to map out, the First Lady’s matchmaking plans to deflect, safety classes to take, and terrorists to avoid. Oh, and a senator’s assistant has been begging Ollie to rig the countrywide gingerbread-man-decorating contest in favor of the senator’s kids …
Then, a cautious, kindly electrician is electrocuted, and the First Lady's nephew dies in an apparent suicide when not 24 hours before he was happily cleaning shrimp with Ollie. Ollie suspects there’s something going on that’s fishier than shrimp cocktail. Now, she'll have to watch her back - and find a killer unlikely to be pardoned.


Ollie is the new executive chef in the White House, and she and her team are very busy with the preparations for Christmas and some other important events. But after a bomb scare, they all need to be trained in safety, recognizing bombs and what to do when they find something suspect. They really have no time for this, but Special Agent Gavin is relentless, no excuses, they all have to take the training. And somehow, he does not like Ollie very much and tries to make an example of her in class.
But Ollie is used to being picked on because of her small size, and she gives as good as she gets, earning his grudging respect. But disasters keep happening. The First Lady tries to matchmake between Ollie and her beloved nephew Sean, not knowing that Ollie is already seeing one of the Secret Service Agents protecting her husband. Sean is around a lot lately, the First Ladies’ father has recently died, and she has inherited his shares in an important company from him. Her new partners, and childhood friends, want her to sell. Their four fathers founded the company, which does a lot of good for charity, and they want to sell it fast, or else they will have to wait 10 years before they are allowed to sell it again. Sean is lady Campbell’s financial advisor, and he really does not want her to sell. But her friends are pressuring her. One of them is in financial troubles for alleged criminal activities, the other is a Senator, who is after her husband’s job, and the third has her own reasons for siding with the men.

A very experienced electrician gets electrocuted in the White House, with Ollie finding him. They were friends and she is really bothered by this. He knew the wiring inside out, he would not have made a mistake like that. And so she asks for advice from one of the other tenants in her building, a very experienced and licensed electrician himself, who comes up with a theory of what might have happened. But the other electricians working in the White House are brushing her off, totally not interested in her theory or looking into the matter. The man was careless, end of the discussion.

And then Sean is found dead in his apartment, while the First Lady is waiting for him for an important lunch meeting with her friends. Suicide the police think. But neither Ollie nor the First Lady wants to believe that. Sean was happy, and optimistic about asking Ollie on a date or something, he never would kill himself. And when Ollie finds something Sean left behind on her computer in the kitchen, she is sure of it.
And so she asks Gavin to look into things. Gavin thinks Ollie is some kind of catalyst, things happen around her, and she is observant to see things other people miss. Which is why she is the one to find the bomb in her storage space …

Ollie wants to help the First Lady, and protect her from the undue pressure put upon her by her former friends to sell, she has a lot of meals to prepare, and getting mugged and almost abducted on her way home is something she really has no time for.


I recently read the first book in the White House Chef series, and enjoyed it, but this one is better in my opinion. Of course I already knew some of the main secondary characters, and it is always nice to catch up with them. There is not much, or rather, any, development in Ollie’s private life, so I think you can read these books out of order without feeling lost.

The book is full of action, lots of things happen, and lots of clues are left for the reader to find. I did suspect some of the things beforehand, but I was still amazed at some of the plot. This is a great mystery and I will certainly read the rest of the series soon.

I like how Ollie handles things. Some on her staff are not happy that she is the new executive chef, but she learns how to deal with them, and get them to do what she wants, and how she wants it done. The pastry described sounds absolutely delicious (there are recipes in the back for a full presidential meal!). She also deals well with the safety lessons, and their instructor after some initial strubbling.

I do hope her relationship develops a bit more in the next book though; I want to know a bit more about her background, meet some friends. Of course she does work extremely hard and long days; there is not much time for a private life, but still.

As said before, there is a lot of patriotism in this book, which is to be expected for a story taking place in the White House, but for me as a non-American, it is a bit much.