The third book in the Sullivans series, published December 13, 2011.
Genre: contemporary romance
Cover: bland. My book has the smaller cover, which is a little bit nicer. 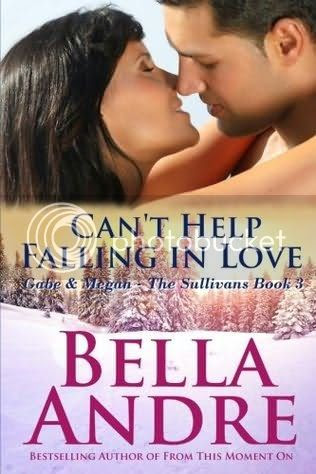 Gabe Sullivan risks his life every day as a firefighter in San Francisco. But after learning a brutal lesson about professional boundaries, he knows better than to risk his heart to his fire victims ever again. Especially the brave mother and daughter he saved from a deadly apartment fire... and can't stop thinking about.
Megan Harris knows she owes the heroic firefighter everything for running into a burning building to save her and her seven-year-old daughter. Everything except her heart. Because after losing her navy pilot husband five years ago, she has vowed to never suffer through loving - and losing - a man with a dangerous job again.
Only, when Gabe and Megan meet again and uncontrollable flames of desire ignite between them, how can he possibly ignore her courage, determination, and beauty? And how can she deny not only his strong bond with her daughter - but the way his sweetly sensual kisses are challenging her to risk everything she's been guarding for so long? This winter, if one - or both - of them aren't careful, they just might end up falling in love.


The third book in the Sullivan series, and again Bella Andre made me fall in love with her characters and her writing.

Megan Harris has been raising her daughter on her own ever since her husband died when flying his plane at night. It is not easy for her, but she refuses to “come back home” to her parents, she loves living in San Francisco. She works as an accountant from home, and spends as much time with her daughter as possible. Megan has been dating a bit, but always safe men. She has no intention whatsoever of falling again for a man with a dangerous profession, a man who can die on her any day. She refuses to go through that again, both for herself as for her daughter. And so the attraction she is feeling for the very handsome firefighter who saved the both of them when their apartment burned down, will come to nothing.

Gabe has also been burned before, in a relationship with a woman he saved from a fire, and he has made the stern decision, never again! It is impossible to be the hero every single day, like when he rescued her. But still, Megan is special, and what he feels for her and her daughter Summer is something worth investigating. And even though Megan explains why there can be nothing between them, Gabe can’t help pursuing her, especially when faith, in the form of his sister Lori, is bringing them together again. It also doesn’t help Megan’s case when Summer clearly has fallen for Gabe as well, and does her best to meet him again, and bring her mother and Gabe together. Even intruding on his ski vacation….

And with the fires of desire burning very strongly between them, and Summer away on a sleepover party at her friends, they will indulge in one night of passion. But can they really stop at that?


I have to admit, I could not see how Megan would drop her stance on a relationship with a man with a dangerous job. But she did, and I was a little bit disappointed in that, as I don’t really agree with her motivation. Of course, them not coming together would spoil the whole HEA of the book, and we can’t have that either. Gabe caved in much sooner, although he did try at first to keep away from Megan.
But seeing his two brothers flirting with Megan was like a red flag to him. He could not handle that, Megan was his.

Gabe is great at his job, he is careful and follows his instincts and the rules, but he also risks his own life saving others. He falls for Megan hard, and when he sets out to pursue her, he never pushes too much. I do appreciate that in a hero. Gabe is also great with Summer, teaching her how to snowboard and answering her myriad questions. The lovescenes and almost scenes between them are smoking hot.

I enjoyed meeting the whole Sullivan clan again, and learning a bit more about them as persons. I do admire their mother, having 8 children is not easy to raise on your own.

The ending of the book makes me hope that the next one is Lori’s story. I want to see how she pursues and catches the man she loves.