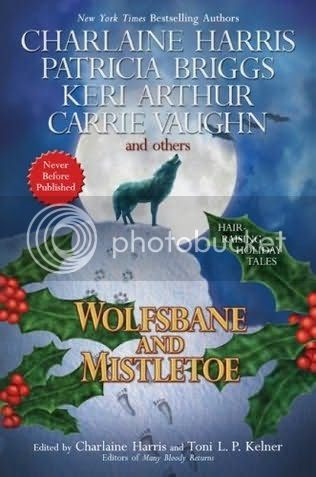 The editors of Many Bloody Returns deliver the perfect howl-iday gift, with new tales from Patricia Briggs, Carrie Vaughn, and many more.
New York Times bestselling authors Charlaine Harris, Patricia Briggs, Keri Arthur, and Carrie Vaughn - along with eleven other masters of the genre - offer all-new stories on werewolves and the holidays, a fresh variation on the concept that worked so well with birthdays and vampires in Many Bloody Returns.
The holidays can bring out the beast in anyone. They are particularly hard for lycanthropes. Charlaine Harris and Toni L. P. Kelner have harvested the scariest, funniest and saddest werewolf tales by an outstanding pack of authors, best read by the light of a full moon with a silver bullet close at hand.
Whether wolfing down a holiday feast (use your imagination) or craving some hair of the dog on New Year's morning, the werewolves in these frighteningly original stories will surprise, delight, amuse, and scare the pants off readers who love a little wolfsbane with their mistletoe.


Have you ever wished you could un-read a story? Or un-watch a movie? Well, in this anthology, there are a few stories I wish I had not read. To me, those are just sick and depraved and I will never read anything by those authors ever again. There are some nice stories in here as well though, mostly from ongoing series I haven’t even read yet. And the only one I have read before is Patricia Briggs – Star of David. I loved that story in her latest anthology Shifting Shadows.

This is a short Sookie storie, featuring her faery grandfather, and although I don’t like the series, I did enjoy this short story.

Donna Andrews – The Haire of the Beast

A fun story about a woman scorned, who takes revenge. Enjoyed this one, and Donna’s writing style.

This story is one of the sick ones. Skip it.

I enjoyed this story, about vampires and werewolves created to fight evil and needing sun light to get energy and healing. About a vampire sister and werewolf brother, and a serial killer.

Kat Richardson – The werewolf before Christmas

If I hadn’t already read the first Greywalker book, I would never pick it up, as I did not like this story at all. But I have, and I will read the next one. Someday.

A story about a werewolf training dogs, and able to communicate while in werewolf form. Loved the dogs parts.

Part of her ongoing Kitty series, which I still haven’t started. But I enjoyed this, were Kitty meets a new werewolf who doesn’t know anything about being a werewolf and can’t control his Wolf or his Change. They are afraid he is the serial killer the police are looking for, but they find the real one.
Makes me want to start this series,

Very strange tidbid of a story, feels like it is part of an other story or series perhaps. It was nice enough, but the background eludes me.

A second chance at love werewolf story, and I enjoyed this one. Grovelling while fighting evil.

Totally dislike this one. A man turns into a werewolf without knowing it, and eats people. He finds out because of the strange items in his toilet. And then mixing it with a weird Santa story, nope. Really disliked it after the intriguing start.

Patricia Briggs – The Star of David

Loved this story, even for the second time.

Two Russian vampires figure out that Santa really is a very old Vampire himself, and want a piece of the action. They end up in Africa, where Santa is defeated by a werewolf raised by Wild Dogs who killed one of his reindeer the previous year.

A story in the world of Cassie Palmer. I did enjoy this one. A halfbreed werewolf who can’t shift who is also a war mage, disliked by her boss, and forced on a case to find out about missing werewolf princesses.

Another one I wish I did not read. It did start out good, about a bully and a boy who stands up to him. But the ending, no, I want to forget that. Skip it.

This story I did like, a young teenager werewolf who has been rescued from foster homes, learns what it means to live in a pack. When disobeying his alpha, he manages to rescue a missing girl. He grows, and I liked that. I did not like the strange Christmas related way the first werewolf was created though.


I really can’t recommend this book. If you love Christmas, you won’t like some of this strange Christmas related werewolf and vampire and Santa stories. If you are a grinch, or if you really enjoy horror stories, you will enjoy this book. I know I will have some more nightmares in the near future about what I read.
So why didn’t I DNF some of those stories? Because the bad ones are so short, they were over before I thought about stopping with reading, and sometimes just the last few pages made the story bad.

So how to rate this one? Some I liked, only 1 I loved (but already knew), and some I really, really disliked or even hate.