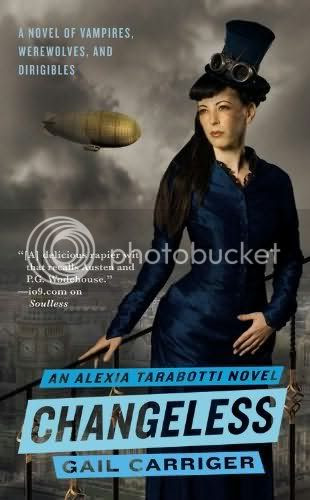 Alexia Tarabotti, the Lady Woolsey, awakens in the wee hours of the mid-afternoon to find her husband, who should be decently asleep like any normal werewolf, yelling at the top of his lungs. Then he disappears - leaving her to deal with a regiment of supernatural soldiers encamped on her doorstep, a plethora of exorcised ghosts, and an angry Queen Victoria.
But Alexia is armed with her trusty parasol, the latest fashions, and an arsenal of biting civility. Even when her investigations take her to Scotland, the backwater of ugly waistcoats, she is prepared: upending werewolf pack dynamics as only the soulless can.
She might even find time to track down her wayward husband, if she feels like it.


Another great book by Gail Carriger. Alexia and Lord Maccon, werewolf alpha of London, and head of BUR, an agency that keeps track of the supernatural population in England, are married. And Alexia has discovered she likes being married, and is even getting accustomed to seeing naked werewolves around, in wolf form and in human form. She also likes being the Mujah, one of the Queen’s supernatural advisors, and the voice of reason against the werewolf and vampire counsellors.

Just when Alexia wants to leave for her next meeting, there is a lot of commotion outside the castle. It appears as though a whole regiment is setting up its tents, and Alexia is informed that is customary, to welcome the soldiers and the werewolf soldiers back into the pack. Of course Alexia knew they were being deployed from India, but why do they have to squat on her front lawn? Also, she really dislikes their commanding officer, who mistakes her for a house keeper he can discipline. He is the back Gamma.

And something is not right in London. Her husband takes of without noticing her, only cryptically telling her, she will find out at the meeting. At which she is even later, as her good friend Ivy appears, telling her she has just gotten engaged to a Captain.
Alexia is appalled at what she finds out eventually. Something is causing all supernatural beings in a specific area in London to become human again and mortal! Something only she can do, and only if she touches that person. And now something is affecting a large area. Is it a disease? Some kind of new weapon invented by the scientists? The dewan and the potentate are not so easily convinced she herself has nothing to do with it. Queen Victoria asks her to investigate, she knows too well her realm needs the power of her werewolf soldiers and the cunning of her vampires to survive. Unfortunately, there is nothing to be done about the ghosts in the area, they have really gone on.

Surprise after surprise for Alexia, as she learns her husband has taken of for Scotland, where he apparently has another werewolf pack, which is not without its Alpha. He never did tell her much about his past. But as the curse seems to be travelling to Scotland as well, Alexia is determined to follow him. He will be mortal there, so she has to keep him safe and find out what is happening. She has always wanted to travel by dirigible, and this is her chance now the trains are out. Unfortunately, she gets some unwelcome company, in the form of her younger half sister, her friend Ivy, and the hatmaker/inventor she met the other night. Also her maid Angelique and her husbands valet are with her. And of course her new parasol with all its nifty gadgets. The journey is not without danger, as someone tries to poison Alexia, and even throw her out of the dirigible (some kind of zeppelin/airship).

Having finally arrived at Castle Kingair, they are not exactly welcome there. It happens to be Conall’s great great great granddaughter who is mistress there now, and she resents him for having left the pack without an alpha, and refusing to turn her into a werewolf. There is also no love lost between Conall and the pack’s beta. Still, they will have to find a resolution for the pack, and find out what is causing them all to be human. And of course, who is trying to kill Alexia, or is someone else the target all along?


A very action filled novel, which kept me reading and reading. The end is very disturbing, and I am so glad the next book in on my shelf. I will dive right into it. No, not going to spoil it for someone who has not read the books yet.

I really like Gail Carriger’s writing style and the unique characters she has created. Both the main and secondary ones. And then the interaction between Tunstall and Ivy, well that was melodramatic, but not unsuspected. And that sister of hers, I wish she would have fallen out of the dirigible. What a mean character. How Alexia can tolerate her, I have no idea.

A great second book in a unique series. I even have the illusion that I know how all the gadgets work in the steampunk scenes. A lovely mix of historical, mystery, paranormal and steampunk, I do recommend the series to anyone. Steampunk is not really my thing, I don’t like the Iron Duke for instance, which is highly loved by most everyone else. But this series, I do like. A lot.