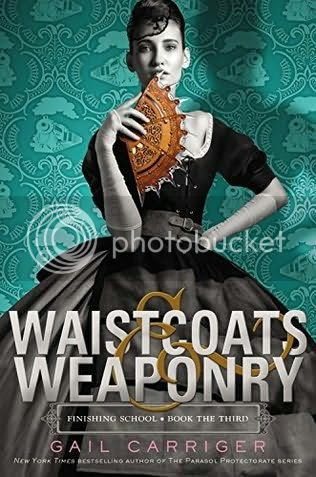 It’s one thing to waltz properly. It’s quite another to waltz properly with a bladed fan stitched into one’s corset.
Sophronia continues finishing school in style – with a range of deadly defences secreted in the folds of her ball gown, of course. Her fashionable choice of weapons comes in handy when Sophronia, her best friend Dimity, sweet sootie Soap and the charming Lord Felix Mersey hijack a suspiciously empty train to return their chum Sidheag to her werewolf pack in Scotland.
But when Sophronia discovers they are being trailed by a dirigible of Picklemen and flywaymen, she unearths a plot that threatens to throw all of London into chaos. With her friends in mortal danger, Sophronia must sacrifice what she holds most dear – her freedom.


Another Young Adult series I can’t get enough of. This is a sort of prequel to the Parasol Protectorate series, and when I finished this book, it made me re-read that series immediately. Because what happens in this book, directly impacts that series.

It is very hard to summarize a bit of what happens in this book, without spoiling the story if you haven’t read it yet. Sophronia attends a finishing school, which is not unusual for young ladies of quality. But this school is situated in a gigantic dirigible, floating in the aether. She not only learns all those things a young lady needs to learn, she also learns how to be a spy, and an assassin. She especially loves her new bladed fan.
Her friend Lady Sidheag Maccon gets some bad news, and needs to return to Scotland and her werewolf pack immediately. Sophronia and her best friend Dimity are on their way to Sophronia’s home to celebrate the wedding of Sophronia’s older sister, accompanied by Dimity’s brother and Sophronia’s beau, Lord Felix Mersey, who is the son of a Duke. The Duke is a high ranked pickleman, which is somewhat a problem for Sophronia, as they are enemies of the school. But perhaps she can sway Felix to her way of thinking ...

While at the wedding, something strange happens, when all the automaton servants start behaving not according to their programming. What is causing it? And when Sidheag shows up, accompanied by the Dewan (the Alpha of all the werewolves in England) and Captain Niall, a lone werewolf and one of their professors, they have to help their friend. No way will they meekly go back to school.

And so they find themselves in the midst of a plot between vampires and their archenemy Monique, who has left the school, and the Picklemen...


I love this series, and I am in awe of Gail Carrigers’ imagination. Sophronia is such a great heroine, she thinks fast on her feet, and doesn’t care about a person’s standing in society, like her friend Soap, who is a sootie (sooties, young boys, take care of the steam engines in her school).
She has a good grasp of politics and she is all for preserving the balance between the vampires, werewolves, and ordinary humans. The picklemen want to get rid of all the supernaturals, and the vampires and werewolves are always competing.

I hope the next book will be written soon, but first there is a new series on the horizon.