Allison Pang – A trace of Moonlight 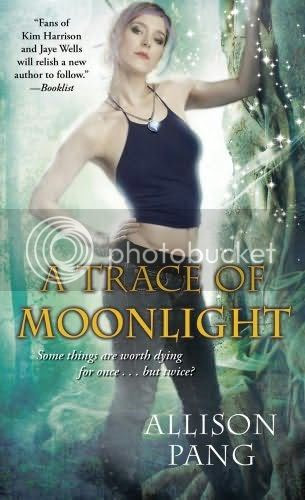 Drinking from the waters of the Lethe and offering herself up as Faerie's sacrificial Tithe ... these just might be the least of Abby Sinclair's problems.

Abby's pact with a demon - whether or not she remembers making it - is binding, so she'd better count herself lucky that (in the words of a daemon who knows better) there's nearly always a loophole. But her friends' reckless attempts to free her, well intentioned though they may be, set off a disastrous chain of events. In no time at all, Abby turns her incubus lover mortal and gets herself killed, cursed, and married to an elven prince whose mother wants her dead. She might have even been able to recover from all that had she not lost the Key to the CrossRoads to her mortal enemy, who promptly uses his restored power to wreak havoc on the OtherWorld and put its very existence in jeopardy.
Only one person can make things right again, but to find her Abby must place her trust in allies of mixed loyalties, and conquer her nightmares once and for all.


This book took off where the previous one ended, a few weeks have gone by. But Abby has no memories of who she is, or was, and how she comes to be engaged to a Faery Prince, living the live of a Princess in Faery. The Queen is nice to her, so is Prince Talivar, and her half sister, Moira. There is also this tiny unicorn, keeping her company. Abby just floats through the days, wandering the gardens. Sometimes she dreams, most often not, but one night, her dream stays with her. Something important happened there, and she met another man in this dream. What does it all mean? Talivar just brushes it off, but Abby feels something is important about it, and the bells from her dream she woke up with in her hand.

Then something horrible happens, Abby dies, but comes back to life again, with all her memories back. Why did they all lie to her, deceive her so? IF she is to be sacrificed to Hell in a few weeks, she wants to go back home, to her friends and her life on Earth as a human. But the Queen shows her nasty side, and forbids Abby to leave Faery, putting a geas on her. Talivar tries to safe her, by Handfasting with Abby, and then claiming his wedding night, which the Queen will have to allow. But she is not happy that her son is fighting her decisions again, and will punish him severely. Abby and Talivar and Phineas escape the castle, trying to reach the Burrow to seek sanctuary, again. With some adventure along the way, they reach their destination, and Talivar will become King of the Unseelie, as he was meant to be all along. With his missing eye and lame leg, he has never been good enough for the Seelie Court, who only want perfection.
Will the Court’s stand against each other in war, again? Or will Moira be the next Queen at last? But then the evil Maurice is making troubles again, major ones this time, by killing the Tree. And if the Tree dies, the Crossroads will disappear for ever, and the Fae will fade. Only Melanie might be able to safe the tree, but she has gone missing ever since Abby ‘died’. She will have to find her way back to the Dreaming to find her, and to safe her. And take care of all the Fae still on earth.


It took me a while to bring the previous story back into my mind, but I totally enjoyed this book. There is no rest for Abby whatsoever. She is still torn between Talivar and Brystion, especially now she is married to Talivar, but she loves them both, in different ways. She is ready to give up her life to safe all her friends, she will keep fighting, she still has to learn to control her powers as a dreamer, she has to overcome her nightmares and her feelings for her father. It is certainly not easy to be Abby, but she perseveres, she fights, and in the end, she is still alive.

I loved meeting all the previous characters again, getting an update on their lives and / or seeing them fight alongside Abby. Phineas, or hornicorn, as Abby calls him, is a fun secondary character. He sacrificed his horn to safe Abby, and I do admire that in him. He still loves his bacon though. The part with the trolls and the goats was just plain fun.
The world building is phenomenal and totally unique. Allison Pang has really done a great job on that. If you like your Urban Fantasy with some hot love scenes thrown in as well, I do recommend this series to you. I would not be able to choose between the two men either.