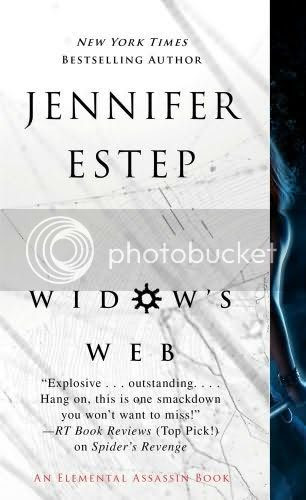 The seventh book in the hugely popular Elemental Assassin series by New York Times and USA TODAY bestselling author Jennifer Estep - Gin Blanco is back and ready for action.
My name is Gin, and I kill people. It's something I've been doing for years as the assassin called Spider, but now, it's turned into a necessity on my part just to survive all the lowlifes in Ashland who are gunning for me. The underworld is still in turmoil, and I seem to be on everyone's hit list these days.

To add to Gin's problems, her lover Owen's ex is in town. Salina is back in Ashland to reclaim an old family legacy - and she thinks that Owen is hers for the taking. Also in the mix is Phillip Kincaid, a casino owner and all-around shady character who has a mysterious connection to both Owen and Salina.
Salina might seem like a sweet Southern belle, but there's more to her than meets the eye. Her water elemental magic makes her a dangerous enemy - and someone who can go toe-to-toe with Gin's Ice and Stone power. But Gin is determined to get to the bottom of Salina's deadly scheme, even though it just might cost her everything… including Owen.


Almost daily now, wannabe assassins try to kill Gin, making if difficult for her to do her job at the Porkpit. Then, to her surprise, Phillip Kincaid enters the restaurant. Phillip is one of the main crime bosses in Ashland, the one who controls all gambling, legal and illegal. He is not just there to sample the food, even though he clearly enjoys it. Phillip wants to hire Gin for a catering job on his riverboat in three days, where he will be hosting a party. Suspicious as always, Gin doesn’t know what to think of it, but the payment is good, and she takes it.
When Sophia and Gin arrive at the riverboat, there is a party going on, but not for the usual high spending crowd, this is more like keg party. The boat is loaded with college students there for a fundraiser for a new animal shelter. And to Gin’s surprise, Eva and Violet are there as well. And Eva is very cosy with Phillip. Gin is sure Owen (her lover and Eva’s big brother) doesn’t know anything about it, as he really seems to hate Phillip Kincaid.

Then someone slowly and painfully kills Phillips main bodyguard, and Phillip himself is the next intended victim. Someone is using Watermagic, and that is a very difficult one to fight. If not for Gin’s Icemagic, Phillip would be death. But Gin has recognized the touch of the magic, and if she did not recognize the woman running away from her, running over the water to the other side of the river and escaping into the woods. It was Owen’s old lover, Salina, who wants him back. She is very powerful, and Gin wants to know why she would kill Phillip, especially with Eva so close by.

It hurts Gin that Owen clearly still has feelings for Salina, and that he won’t believe that she is the bad guy here, and not Phillip. It will take a lot for him to believe that, and even then he won’t give up on trying to help Salina. Owen does feel guilty that he did not protect his baby sister back then, that he did not believe Phillip but Salina.
Even when he sees Salina in action, trying to kill his old teacher and Gin, Owen cannot stop believing in his old love.

But Salina has come home for more than getting Owen back …


Another book I’ve been saving for some while now, but I have been skimming some reviews of this series lately, and I just had to read it. I enjoyed it very much, catching up on the usual cast of characters, and meeting some new ones. Gin and Bria are getting along better and better, and Bria really managed to surprise me a few times. Finn is outrageous as ever, flirting with every female in sight. Owen did disappoint me though; I am surprised that he cannot see the truth, the cruelness inside Salina. The fact that she likes to torture and kill with her water magic. Of course your first love is special, but he or she has to deserve that love and loyalty too. I liked the friendship that Gin gets in this book a lot.

I am looking forward to the next book already.