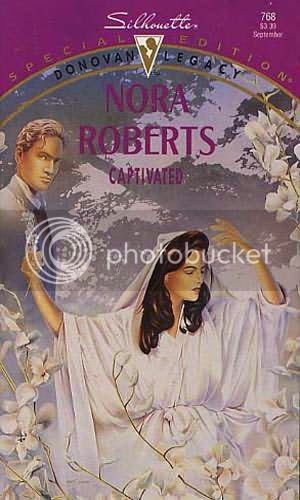 His interest in her was purely professional . . . Or so he told himself. Nash Kirkland had sought out the alluring Morgana Donovan to help him research his latest screenplay, though the hard-headed sceptic didn't believe for a minute she was what she professed to be. But, as Morgana revealed herself to him, Nash found himself falling under her bewitching spell. Nash had never trusted his feelings and always kept them in check. So how could he be sure the irresistible passion he felt for Morgana was real and not just some conjurer's trick?


Sometimes, you just have to pick up an old Nora Roberts book, sit back, and relax, and enjoy the story. Don’t think too much, just read and dream away. The Donovans series is one of my favourite series by Nora Roberts, and this is the first time I have read it in English.

Nash Kirkland is a screenplay writer, who likes the paranormal and horror in his movies, but he doesn’t believe in it, at all. For his next movie, he wants to investigate witchcraft, and witches, so he seeks out the local witch, Morgana Donovan. At first, Morgana is irritated by him, and his stereotype thoughts about witches, but then she becomes intrigued, and agrees to answers his questions about herself and her craft. Of course, she knows he will change her life irrevocably, but she is drawn to him, and willing to take the risk. Even though she hates the thought of destiny, she knows she cannot avoid it and be happy.
Nash is equally intrigued by the beautiful and smart Morgana, but he thinks it all a hoax, a way to have more people in her shop. Yes, he is attracted to her, but after one fireworks worthy kiss, he decides to keep business and pleasure separated. He doesn’t do relationships, and he just feels he might be in over his head with Morgana. Still, the attraction between them keeps growing, but before Morgana will sleep with him, he has to know and acknowledge the truth: she really is a witch, and everything she told him, is true. It takes some kind of temper tantrum from Morgana, and a flashy display of her powers to make him see sense at last.

Their relationship is progressing nicely, with some teasing from Morgana’s cousins Sebastian and Anastasia, who are also witches. But when Nash fears he is truly falling in love, he panics. And accuses Morgana that she has bewitched him, used her powers on him. No way could he be feeling real love for her. Morgana is devastated, and furious with him. Can he ever get in her good graces again?


I loved this book again, and it will be re-read a few times in the future. Morgana is such a great character, as is Nash, though he is truly blind and stubborn at times. Nash has a hard past, and his lack of wanting to believe or be in love, was understandable. I loved the bantering between the cousins, and am looking forward to reading their books again as well. What I would love though, is a book about all their parents. Two sets of triplets and witches, falling in love with each other, in Ireland. What could be better?
No romantic suspense, just contemporary romance with a little witch craft and magic thrown in. I loved it. Some hot lovescenes, and some great companion animals as well. Luna the cat, and Pan the wolfhound.