Lucy Arlington – Buried in a book 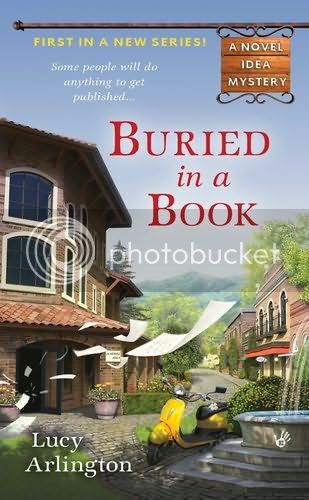 After receiving her first pink slip at the age of forty-five, former newspaper journalist Lila Wilkins is desperate for work, even if it means taking a pay cut. After combing through the classifieds, Lila accepts an internship at A Novel Idea, a thriving literary agency in the utopian town of Inspiration Valley, North Carolina.
Lila can’t imagine anything better than being paid to read, but with a crew of quirky coworkers and sky-high stack of query letters, she doesn’t exactly have time to discover the next great bestseller – especially when a penniless aspiring author drops dead in the agency’s waiting room.
No one else seems too concerned about the man’s demise, but when Lila uncovers a series of threatening letters, she’s determined to uncover who killed the man’s dreams of literary stardom…


Lila is a 45 year old single mom, raising her teenage son Trey and working as a journalist of a small paper. When she gets fired, she is only stumped for a moment though. She needs a regular paycheck to support the both of them, so she goes jobhunting immediately. She remembers an ad that has been appearing quite regularly in their paper, about an intern job at a literary agency. After a 5 minute phone call, she has the job and can start the next day.
The agency is in the same small village her mother lives, which will be a huge benefit.

Finding a murdered man on her first day is not bad enough, her son wrecks her car when he goes out with his drunken friends and demolishes the school football field. Her car is totalled, the school is suing for damages, and she just doesn’t have the money to pay for a new car, and the damages. There is only one solution: go live with her mother again, and sell her house. The sweet little cottage she saw herself living in, will be a dream now for sure.

Still, the dead man at the office is really plaguing her mind, especially as her co-workers just seem to be relieved that he is dead, and not bothering them anymore. And that is just wrong, he was a human being, so how did he become homeless, if he was really a homeless guy? He came every day, bringing wild flowers and a query letter, but how come no one knows what is in that letter? And so Lila sets out to investigate Marlette dead, and his life. Is one of her co-workers really the murderer? With some help from the downstairs barista, and the people in the co-op on the top of the mountain, she will get the story.


When I discovered that Ellery Adams, one of my favourite cozy mystery authors, had written another series, together with author Sylvia May, I was very excited, and just had to have that book. I’ve been blown away by Ellery’s other books, and so my expectations were perhaps a bit too high.
So, yes, I am disappointed with this book a little. The writing style is still awesome, the plot is very good, it is just the main character I cannot relate to. She is 45, but she is very impulsive, doesn’t think things through very much, acting like a much younger person. Like diving into the dumpster, searching people’s offices, and kissing her flirting co-worker. While being attracted to the officer in charge of the investigation as well. She is just too openhearted, confronting people who might very well want to kill her for it.
Her son is not being punished at all for wrecking her car, he just goes on with his life. Falling in love with life at the co-op and just leaving his grandmother’s home without telling them. I really could not get my mind around that. Lila just forgives him for everything, and doesn’t even scold him as her mother interferes.
And of course, in real life you don’t get a new job in 5 minutes after just being fired.

I did like her mother though, the Amazing Althea. She is a great secondary character and a bit of a clair voyant. Still, the work in the agency sounds great, reading query letters, finding possible new bestselling authors.

I will read the second book in the series, as I have already pre-ordered it, but I have to like the main character in order to enjoy a book. And I just cannot like Lila and her antics.