The second book in the Harper Hall series, published 1977.
Genre: sci-fi / fantasy
Cover: I prefer my own book cover over this very oldfashioned one. 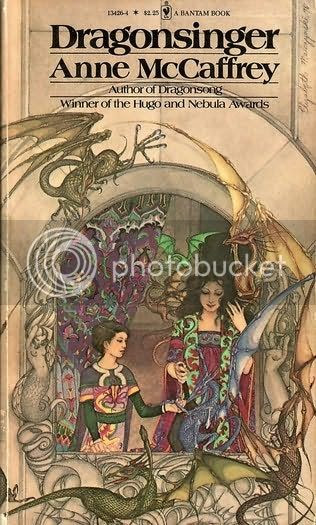 When Menolly, daughter of Yanus Sea Holder, arrived at the Harper Craft Gall, she came in style, aboard a bronze dragon followed by her nine fire lizards. The Masterharper of Pern, aware of her unique skills, had chosen her as his only girl apprentice. But the holdless girl had first to overcome many heartaches in this strange new life. Two things sustained her – her devoted lizards, a subject on which she was fitted to instruct her Masters – and the music … music of compelling beauty, music-making where at last she was accepted. In the Great Hall, Menolly could fulfil her destiny.


When Master Harper Robinton finally found the song writer he had searched the whole of Pern for, in the Benden Weyr, he did not hesitate to whisk her of her injured feet, and take her with him to Harper Hall, where she belonged. Some would argue she belonged at the Weyt, having nine fire lizards, but he knew she was born to be a Harper. He needed her songs, and it did not matter that she was a girl to him. And thanks to Menolly, the Master Harper has two fire lizard eggs with him, one for himself and one for his aide, Sebell. Menolly will have to teach them how to keep the eggs warm, and how to Impress their firelizards when they hatch, and how to care for the hatchlings. But for the rest, she is the student. First some of the masters test her knowledge, to find her standard, and perhaps to find fault with what Petiron thought her. But Menolly is pitch perfect, can read and write music, and even make the instruments Petiron only told her how to make due to a lack of materials at Half Circle Sea Hold. As the only female apprentice, Menolly is housed with the paying female students, at Dunca’s cot. The woman is terrified of her firelizards though, and resents Menolly for everything she does or doesn’t do. The other girls are also angry that she outranks them, and is a real apprentice, even though rank does not apply at the Harper Hall.

But Menolly does make some good friends, Silvina, the head woman, who makes sure she has some new clothes, and that there is enough food set apart for her fair or fire lizards. Then there is Camo, a mentally handicapped young man, who loves her firelizards and helps her feed them, and the youngest male apprentice, Piemur. Who has a lovely singing voice, which is treasured by the choir master, but is also a rascal. He helps her learn the ropes, and defends her against the other girls. He is a fun character, and his story is the third book in this trilogy. Although he does appear in the other books now and then.

Menolly might have trouble with her living accommodations, but she loves the music. Mornings, afternoons and evenings she lives and breathes in the music. Still, her firelizards are a big part of her life as well, taking care of them, but they also get her in a bit of trouble. Still, the Master Harper needs her help, and so does Lord Groghe of Fort Hold, who has a golden queen of his own, of the same age as Beauty.


This story only spans a sevenday, but lots of things happen to Menolly. She learns a lot, and she has never been happier in her life, at the end of this week. The difficulties have been solved, and she has found her place in the Harper Hall. I loved this book, you just have to read it after Dragonsong.