The second book in the Bannion Family series, published 1984.
Genre: contemporary romance
Cover: this one is a lot prettier than my book, and a scene from the book itself. Love it. 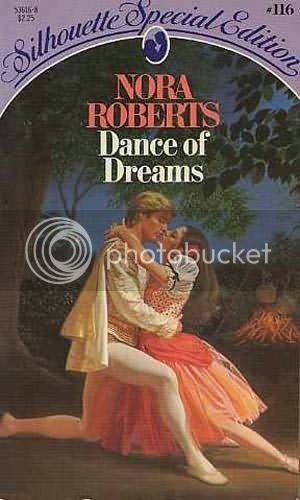 Ruth Bannion had never met anyone like Russian emigré choreographer Nickolai Davidov. Ruth was open, giving, but Nickolai's background had left him reserved, even wary, and his pride would not let him reveal his need for her. Fear of rejection kept him from speaking the truth. That same fear sent her away to hide on the Connecticut coast. But when he came after her at last, there was no more fear, no more wariness, only a lifetime of love that would never need to be hidden again.


Another nice romance from Nora Roberts. I really enjoy those and will continue to read my way through her backlist, slowly but surely.

In the end of the first book, Ruth finally got permission from her uncle and guardian, Seth, to come to New York to dance. Ruth is a great young talent, and she needs to learn from the best. The life of a dancer is not easy, long hard hours of training each day, lots of pain, but it is in her blood and Ruth loves it. After 5 years of hard work, Ruth has achieved her goal, she has come from just a member of the corpse to being the star ballerina in Davidov’s new ballet, with himself as her partner. As a young girl she had a big crush on Nick, but he never seemed to notice. But now, something seems to spark between them. Nick has no intention to act on it though. He thinks Ruth still too young, and that she needs careful romance. They will have to focus on studying the new ballet, so there is no time for that. He really hurts Ruth with that, and she vows she will never dance with him again after this ballet is finished. But her passion sparks in the role of gypsy to his Russian Prince, and they bring out the best and the worst in each other. As a director, he is very demanding, and he can flay his students/dancers with his words.
Even though Nick is very charismatic and always in the center of attention, someone who enjoys women a lot, he is a very private person, and he won’t open up even for Ruth. When she learns some secrets from her main competitor, someone who is very jealous of her and wants Nick as her own partner, she is hurt again. Why could he not tell her himself? Nick doesn’t understand her at all, and gets angry at her for expecting things from him. He has no idea how to be in a relationship. There is never enough time for them to be together while not dancing. Even the owner of the ballet warns Ruth that if their relationship doesn’t work out, and they won’t be able to dance together anymore, Davidov is more important to the company than she …


I enjoyed Ruth a lot. She is a strong personality, and won’t give in to Nick without a fight; she won’t accept everything from him just because he is Davidov. Luckily, she still has Lindsey and her uncle Seth to fall back on when needed. And Lindsey can help her understand Nick a lot better. In the few years they danced together, they became the best of friends and she knows him like no other. But Ruth is in love with Nick the man, and she admires him for his art. And in the end, she demands from him what she wants from their relationship.
Nick is a kind of tyrant, he is the creator of the new ballet, the director and the main dancer. Everything has to be as he has envisioned it, and it is not an easy ballet to dance. He has fought his feelings for Ruth from the first moment they met, when she was just 19. He hates seeing her with other men, like Donald, even though Ruth clearly is not in love with him. When the sparks between them finally ignite, Ruth is his, and he will have her. Still he is afraid of being in a real relationship, and when she fights back, he pushes her away.

It was nice revisiting Lindsey and Seth, and their two young children.

I do recommend those old Nora Roberts stories to everyone who needs a nice feel good romance with a nice backstory. I have never even seen a ballet, but the one described in this book sounds very beautiful.