The first book in the InCryptid series, published March 6, 2012.
Genre: urban fantasy
Cover: nice, I like her attitude. 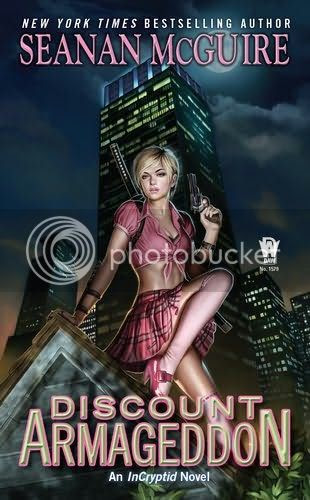 
After reading lots of glowing reviews about this series and other books written by Seanan McGuire, I had to buy the book when it was available on my favourite secondhand website. And although I did enjoy the story and the writing style, I am certainly not blown away by it. It was nice, it was original, but also a bit too much over the top for my tastes. The humor felt a bit forced at times. And I would have liked to know why those mice celebrated so many strange things.
I also think that Verity is way too trusting too soon concerning Dominic De Luca, he does believe her and her family to be traitors, and works for their biggest enemy. It is also not explained how he has found her in her “alias”, or her house.

The plot of the story though, that was a good one. I did like that, and how original the story is, but that is more due to the very unusual cryptids living in New York. And of course, the dragon. I do have a fondness for books with dragons. It is a nice mix of good ones and bad ones and ugly ones. Verity’s family is nice and quirky too, and I am very happy I did not grow up with them.

So, I did like parts of the story, but other parts not so much, and I found myself not in a hurry to finish the book. I will probably read the next book one day, but will wait for a cheap copy. I will try Seanan McGuire’s other series, which is supposedly better. I do have some of those books as well.