The sixth book in the Kate Daniels series, published July 30, 2013.
Genre: urban fantasy
Cover: I like it 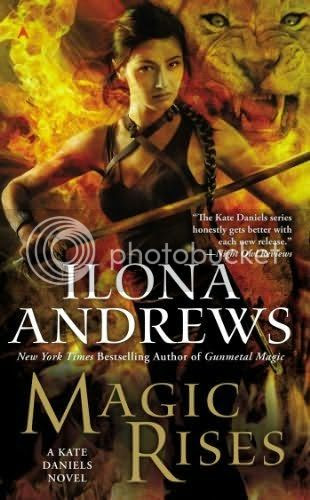 Atlanta is a city plagued by magical problems. Kate Daniels will fight to solve them—no matter the cost.
Mercenary Kate Daniels and her mate, Curran, the Beast Lord, are struggling to solve a heartbreaking crisis. Unable to control their beasts, many of the Pack's shapeshifting children fail to survive to adulthood. While there is a medicine that can help, the secret to its making is closely guarded by the European packs, and there's little available in Atlanta.
Kate can't bear to watch innocents suffer, but the solution she and Curran have found threatens to be even more painful. The European shapeshifters who once outmanoeuvred the Beast Lord have asked him to arbitrate a dispute—and they'll pay him in medicine. With the young people's survival and the Pack's future at stake, Kate and Curran know they must accept the offer—but they have little doubt that they're heading straight into a trap…


The book starts with a heartbreaking scene. Julie’s best friend Maddie and her twin sister Margo have gone loup, like one in four shifter children do during puberty. And when they cannot snap out of it themselves, they have to be terminated. Their mother is heartbroken, and asks Kate for her help. All Kate can do is give Meredith more time though. There is a cure for this, something called Panacea, but the European packs guard the secrets of how to make it carefully, and buying enough of it is impossible.

When Curran is asked by three European packs he had dealings with in the past, to come over and act as negotiator between them, they know they will be walking right in a trap. But he will be paid in Panacea, and they desperately need it. Of course Kate will come with them, with 5 bodyguards/companions each. Travelling to Europe will not be easy, with Tech and Magic wreaking havoc on the world, they will need a good ship and a trustworthy crew to sail them over. Saiman is the only choice left to supply them with a good ship. Kate is very much surprised that he has decided to join them on the journey, as she knows he is deadly terrified of Curran (and with good reason).

Their job will be to keep Desandra safe. She is pregnant from two different men, both her previous husbands, and her father once promised a very important and profitable pass in the Carpathian mountains to her firstborn child. But now Jarek Kral has vowed he would rather kill his only child and the children in her womb, than give up the pass. For now, Desandra is in a neutral place, but she will give birth in two months, and all three packs will be there to witness the birth. Depending on which child will be born first, that pack will claim the inheritance.
Desandra is sad as neither of her husbands seem to care about her at all. Her first husband, Radomil of the Volkodavi pack from Ukraine is ruled by his brother and sister, and seems happy about it. Her second husband, Gerardo of the Belve Ravennati from Italy, is completely under his mother’s thumb. Neither men fought for her, when her father demanded she came back home.

On the journey they have to deal with dolphin pirates, and they are really intent in killing Kate. But Kate can handle herself, just like the other members of their party, and they defeat the pirates.

Desandra is not the only woman from Curran’s past, waiting for him in Gagra though. Her father once gave her to him in exchange for his son, but Curran denied him, and send Desandra back. Now not only the Djigits (jackals) are on the shore waiting, but also a little golden wolf princess named Lorelei, who is determined to steal Curran from Kate. After all, she is only a fragile little human, and Lorelei is a shifter. She would be much better suited to the Beast Lord!

But when they meet the Lord of the Castle, Kate’s worst fears have come true. Lord Megobari is none other than Hugh d’Ambray, Rolands warlord, the men she was trying to escape. The trap is not set for Curran at all, but for her. He does know she is Roland’s daughter after all. But why doesn’t he kill her on the spot? Why the elaborate setup to get her here?


This is a book filled with action and danger, and emotion. Ilona Andrews sure put Kate through hell in this book, thinking that she is losing Curran to Lorelei, having Hugh want her, and make her fight him, revealing her powers to him. And then there are those impossible shapeshifters hunting her. But she does make allies in unsuspected places, just by being herself, and taking care of those unable to take care of themselves. She walks into danger knowingly, if she can safe Curran’s life with it, or that of her companions. Kate is courageous and kick ass, and has the biggest heart of them all.

The ending to the book was heartbreaking and awesome, and I cannot wait for the next book to be published. Ilona Andrews sure tugs on my heartstrings, but she also makes me laugh at times with her subtle sense of humor. She does not shy away from making hard decisions and have bad things happen to her characters. And even though it hurts my reader’s heart, it makes the story that much stronger and realistic.