Anne McCaffrey – The Tower and The Hive 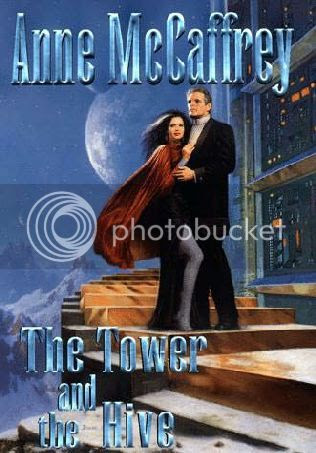 For generations, the descendants of the powerful telepath known as The Rowan have used their talents to benefit humanity. As human civilization reached out to colonize the stars, the family led Earth to ally itself with the peaceful alien Mrdini. Together, the two races have held back the predatory Hivers, who once decimated entire worlds. But there are factions on Earth who resent the power the family has accumulated. Now, with their goals of peace and prosperity so close at hand, The Rowan’s descendants face the looming destruction of all they have suffered to achieve...


The last book of the series, and everything comes to an end. The Fleets have found all the occupied Hiver colonies they could, and have made sure that they have no spaceships left to leave their planets and colonize/annihilate another planet. But now they have to find a way to contain the Hiver population so there is no need for it.
And not only that, now there are no longer any need for Mrdini to “go on the line” in the space ships, their worlds are becoming dangerously overpopulated as well. Zara Lyon is asked to study them, and to find a way to diminish their procreation as well, before the Mrdini’s become as bad as the Hivers. Following the Hiver’s trails throughout space has found them many colonisable new planets, but there just are not enough resources and Talents to operate the necessary Towers to colonize them quickly enough. And humans are grumbling that Mrdini’s are getting the first few planets, not considering that those are too hot and bright for humans anyway.

I have to admit I like this book less, as there is not much battle action in it. A lot of observations about the Hivers and the Mrdini. The fun parts in this book are the personal lives of Damia’s children, and their choices.

Still, this is a series I highly recommend if you love a mix of science fiction/fantasy with a dash of romance. I have read it often already, and doubtless will read them a few more times.