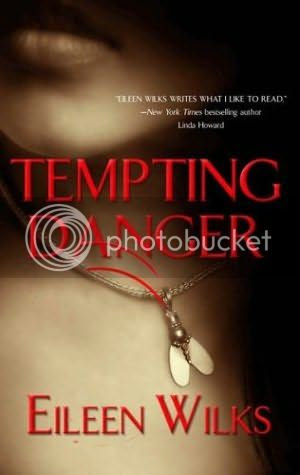 USA Today bestselling author Eileen Wilks has thrilled countless readers with her fresh and compelling stories. Now she has created a bold new world where the magical and the mundane coexist in an uneasy balance – a balance that is threatened by a cold-blooded killer. And the only one who can end the threat is a cop on her own knife-edge struggling with a particularly tempting danger...
Lily Yu is a San Diego police detective investigating a series of grisly murders that appear to be the work of a werewolf. To hunt down the killer, she must infiltrate the clans. Only one man can help her – a werewolf named Rule Turner, a prince of the lupi, whose charismatic presence disturbs Lily. Rule has his own reasons for helping the investigation – reasons he doesn’t want to share with Lily. Logic and honor demand she keep her distance, but the attraction between them is immediate and devastating – and beyond human reason. Now in a race to fend off evil, Lily finds herself in uncharted territory, tested as never before, and, at her back, a man she’s not sure she can trust...


I can’t believe I had this book on my shelves for so many years, without reading it. It is good, it is different, and I loved it very much. Lily is a police officer, and a sensitive. She can touch something or someone and feel what kind of magic has been used or has touched the object. She is careful about keeping her ability a secret, as she doesn’t want to be used by others, or to oust people.
But now a man has been killed by a werewolf, and she will have to find the killer. They are close by Club Hell, a known hangout for the lupi. It is run by Max, a gnome, and everything is allowed there. Rule Turner, the La Nuncio of the local pack called the Nokolai, is known to hang out there. He is the next in line to become the clan Alpha, and the local press sees him as some kind of prince.

More murders take place, and Lily is convinced this is sorcery, not murder by werewolf. But sorcerers have been extinct since the purge some 400 years ago, and her captain doesn’t want to believe her. But the FBI’s special division does. And when her captain puts her on leave for fraternizing with a suspect, she is immediately hired by the FBI as a consultant. Rule Turner is the local werewolf prince, as he will be the next Alpha when his father dies. As he was recently ambushed, that has suddenly become a real possibility. There is a new bill going through the senate, about giving lupi when in human form, human rights. Meaning they can only be shot on sight when in their wolf form. But not all the clans are happy with this bill. It also means they will lose some of their heritage, their rituals, if they are not allowed to kill in challenges. So who is trying to frame Rule?

Rule’s best friend is a lupi sorcerer, something new and thought impossible, but he is a good friend and sometimes he sees things about the future. The bad guys capture him, and try to make him work for them. But he will do everything in his considerable powers to thwart them. After all, they work for his enemy. Even though Cullen is clanless, he is not without honor.

O yes, Lily does know he is innocent, but does she believe that she is his Chosen? That the bond between them cannot be severed? And when an ancient Goddess appears to be behind it all, the lupi’s ancient enemy, Lily doesn’t know what to believe. She doesn’t like religion, as her family has been persecuted for it through the ages.
And now she has to deal with a cult, traitors in the police department and lupi, a dangerous artefact and an insane woman who can bend minds leading them ...


It was a very interesting and intriguing story, and I loved it. I severely dislike Lily’s mother, but her grandmother is a power of her own, and a big surprise. The werewolf lore in this book is completely new and original to me, and I enjoyed discovering it. Only the men are werewolves, even though there are female children, they can’t change, but they are part of the clan.
I always enjoy books with multiple types of paranormal creatures in it, and this one delivered on that. Like the creature that Max is, he was fun. And a pervert.

I can’t wait to dive into the next book in this series. If you like your werewolves sexy, you need to read this series. My friend Maia has told me there are lots of good stuff and many surprises coming in the next books.