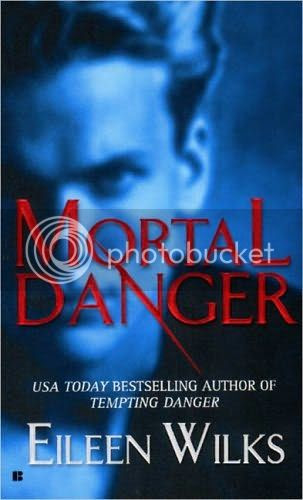 USA today bestselling author Eileen Wilks returns to the fascinating world she introduced in Tempting Danger, and takes readers to the very edge of passion and suspense – where deception and betrayal can not only place your life in jeopardy, but your very soul in mortal danger...

Former homicide cop Lily Yu has a lot on her plate. There’s her sister’s wedding, a missing magical staff with unknown powers, and her grandmother’s sudden decision to visit the old country just when Lily could use a little advice. Maybe she should turn to the man she’s involved with, but for all the passion that flares between them, she doesn’t really know Rule Turner. Yet she’s tied to him for life, both of them caught in an unbreakable mate bond.
That Rule is a werewolf, a prince of his people, only complicates matters.
Now an agent in a special unit of the FBI’s Magical Crime Division, Lily’s job is to hunt down Harlowe, a charismatic cult leader bent on bringing an ancient evil into the world. But what Lily doesn’t realize is that Harlowe has set a trap – for her. And then the unthinkable happens.
In the blink of an eye, Lily’s world divides and collides, and she is thrust into a new and frightening reality. Her only hope will be to trust Rule – and herself – or Lily will be lost forever...


Even though Lily killed the mad priestess Helen, cult leader Harlowe managed to get away with the staff she used to control people’s minds. Their new mission is to find Harlowe, and destroy the staff. A new team member is added, Cynna, who is a Finder.
But first, she has to survive her sister’s wedding, and her family. So when she sees a woman who looks exactly like Helen, she has to follow her to find out who she is. But before she can do that, she is ambushed in the ladies room, and when she wakes up, there is a faint demon taint near her shoulder wound. How can that be? Has she been possessed?
Luckily, the lupi’s Healer, Nettie, shows up in the hospital to take care of Lily, and to determine if she is possessed by a demon. Which she is not. But still, everytime Lily touches her shoulder wound (she was shot in the previous book), she feels a taint, which worries her.

While Lily is working the case, Rule needs to stay close to her, because the mating bond does not stretch too long, although the boundaries are widening. Cynna used to date Rule 10 years ago, and she is very surprised that he is monogamous now. That is not a lupi custom at all. Lily is not allowed to talk about lupi secrets to outsiders, so she can’t explain things to Cynna. Rule has to take care of lupi business as well, and he doesn’t share those things with Lily. He is very highhanded in making sure she is followed and protected, even though she really does not need it. But when Harlowe abducts her little sister and forces Lily to come to him, Rule and his werewolf friends are able to follow them and come to their rescue. Of course protecting Lily also means hindering her, she can’t take a shot at Harlowe. And when he hits her with the staff, it burns, and when Cullen fries him with mage fire at the same time, reality rips open...


I really don’t want to spoil the rest of the story, but it is good and awesome and totally unpredictable. Ancients, demons, hell, surviving, dragons, shooting and blowing things up. This book has it all, with lots of twists and surprises.

This series is fast going to become one of my favourites, and I can’t wait to dive into book 3 and find out what will happen next. Will Cullen and Cynna become an item? Will Cynna become the next Rhej? And how come a dragon knows Lily’s grandmother? What does the Goddess want with Lily?

The one thing I did not like, was Rule, and his habit of not telling Lily things she needs to know, and being so highhanded. I sure hope he gets his act together, and finds out that a life mate is more than protecting the mate. Lily needs to know more about him, about the lupi and her new clan, and what he is doing.