Deborah Blake - Wickedly Ever After 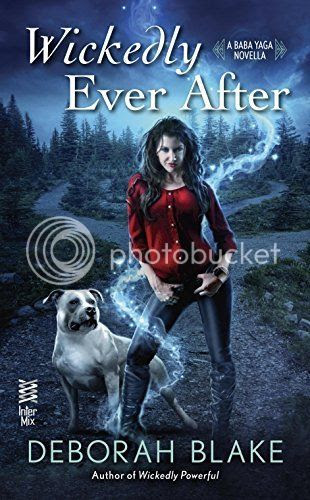 Known as the wicked witch of Russian fairy tales, Baba Yaga is not one woman, but rather a title carried by a chosen few. They keep the balance of nature and guard the borders of our world, but don't make the mistake of crossing one...
Having triumphed over a powerful enemy and ended up with both a wonderful guy - Sheriff Liam McClellan - and an adorable adopted daughter to raise as a Baba Yaga, Barbara Yager is ready to welcome her happily ever after.
But first she must bring Liam to the Otherworld and get the Queen's permission to marry him. The Queen, however, is not so easily persuaded. She gives them three impossible tasks to complete in two weeks' time - and if they fail Barbara will have to watch Liam slowly age and die like all humans, and kiss her happily ever after good-bye forever.


I have recently fallen in love with this series, and this novella is a great ending to the trilogy. Barbara wants to marry her Liam, but for that, she needs the Queen's permission. The Queen denies her that permission, but relents at the request of her King, and gives Barbara three impossible tasks to fulfull…
But when you are magical, three impossible tasks are suddenly not that impossible any more …

A lovely novella, and I am very much looking forward to the next trilogy, about the Riders. If you love paranormal romance, and want something fresh and different, try this series.