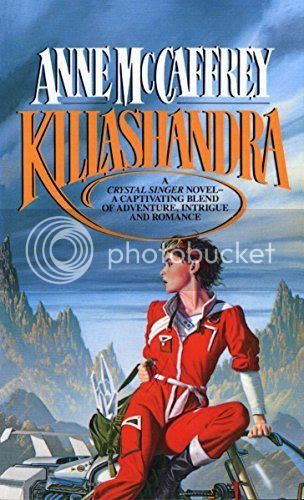 The wheel of fortune.
Killashandra Ree's life was one of catastrophic changes. She had joined the Heptite Guild to become a Crystal Singer, get rich, and forget her past.
And at first everything when just as she had hoped. In one season on the deadly beautiful world of Ballybran, she had sung Black Crystal, grown wealthy, and met a man who made her sorrows seem unworthy of notice.
But then, a year later, a devastating storm turned her claim to useless rock. In short order she was broke, she had crystal sickness so bad she thought she'd die, and the only way she could be true to the man she loved, was to leave him…


Desperate to get off planet, Killashandra accepts an assignment to go to Optheria, to repair their important Optical Organ for the Summer Festival. It is a strange planet, as apparently its population is so content, that they never want to leave the planet, not even for a holiday.
But as soon as she arrives, Killashandra notices that not everyone is happy, and someone even tries to kill her! Luckily, she heals fast, and is able to attend the banquet in her honor.
But the food and the company is most certainly not to her liking, and so she makes up a story about Crystal Singers needing a certain amount of alcohol, and certain food stuffs daily…

When Killanshandra starts work on the repair of the organ, she has an encounter with a stubborn guard, and storms out of the building. While sightseeing, she gets abducted and left on a deserted island. Resilient as she is, she manages to escape after a few weeks, and reach civilization. The Islanders though are completely different from the mainlanders, and she decides to stay incognito. Especially when she recognizes her abductor, and he likes this new different look of her.

Slowly Killashandra learns the secrets of this planet, and decides to help the population as much as she can, but she needs more allies on planet first …


A great second book in the series, and a very sweet love story to boot. But Killashandra cannot stay on Optheria, Ballybran is in her blood (literally) and she has to leave before it is too late. And Lars doesn't want to leave his beloved planet and especially its oceans…