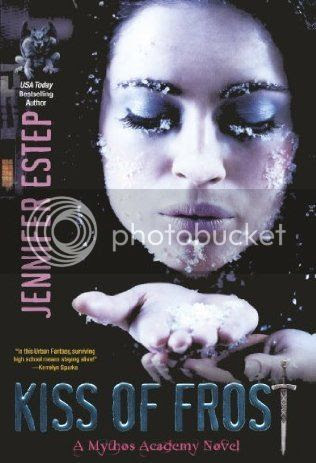 Logan Quinn was trying to kill me. My Spartan classmate relentlessly pursued me, swinging his sword at me over and over again, the shining silver blade inching closer to my throat every time. A smile tugged up his lips, and his ice-blue eyes practically glowed with the thrill of battle. . .
I'm Gwen Frost, a second-year warrior-in-training at Mythos Academy, and I have no idea how I'm going to survive the rest of the semester. One day, I'm getting schooled in swordplay by the guy who broke my heart--the drop-dead gorgeous Logan who slays me every time. Then, an invisible archer in the Library of Antiquities decides to use me for target practice. And now, I find out that someone at the academy is really a Reaper bad guy who wants me dead. I'm afraid if I don't learn how to live by the sword--with Logan's help--I just might die by the sword. . .


Mythos Academy students are excited, because it is time for the Winter Carnival. Which means the whole school will go to a posh skiing resort, where they will do all kinds of winter sports, but especially: party! Get drunk and hang out. The other branches of the Mythos Academy will be there as well, so there will be new friends to make and make out with…
Gwen Frost is still having a crush on Logan Quinn, but he has only eyes for his new girlfriend Savannah, one of the Valkyries. She doesn't really want to go to the Winter Carnival, but when someone is seriously trying to kill her, she doesn't have much of a choice, especially as her grandmother urges her to go as well.

The murder attempts don't stop though, but Gwen does come a bit closer to Logan and his friends… and she learns how to handle her intelligent sword Vic, just in time…