The first book in the Finishing School series, published February 5, 2013.
Genre: Young Adult steampunk fantasy.
Cover: nice, but on the book itself, the head is partly cut off. 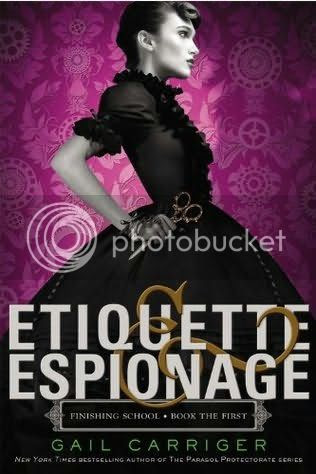 It's one thing to learn to curtsy properly. It's quite another to learn to curtsy and throw a knife at the same time. Welcome to Finishing School.
Fourteen-year-old Sophronia is a great trial to her poor mother. Sophronia is more interested in dismantling clocks and climbing trees than proper manners, and the family can only hope that company never sees her atrocious curtsy. Mrs Temminnick is desperate for her daughter to become a proper lady. So she enrols Sophronia in Mademoiselle Geraldine’s Finishing Academy for Young Ladies of Quality.
But Sophronia soon realizes the school is not quite what her mother might have hoped. At Mademoiselle Geraldine’s young ladies learn to finish … everything. Certainly, they learn the fine arts of dance, dress and etiquette, but they also learn to deal out death, diversion and espionage – in the politest possible ways, of course. Sophronia and her friends are in for a rousing first year’s education …


You all probably know that I am not big on Young Adult, nor Steampunk books. Still, I loved the Parasol Protectorate books by Gail Carriger, and when I found out she was writing YA, I just had to read it. And I am not sorry, as I absolutely loved this book. It is kind of a prequel, featuring a very young Madame Lefoux and Lady Kildair as secondary characters.

Sophronia Temminnick is a middle child, with lots of older and younger siblings, and kind of a disappointment to her mother. She loves to find out how mechanicals work, to climb trees and other stuff, and doesn’t care one whit about fashion and clothes. So when she is shipped of to a Finishing School, she is not happy. But from the moment she sets foot in the carriage with the Headmistress and two other children, she finds out there is more afoot with this finishing school. It is not only about learning manners, and curtseys and the ladylike arts. This is a school that teaches its pupils to finish everything, to be a spy and an assassin and whatever else is needed. Sophronia doesn’t know if she is cut out to be an assassin, but she sure is a good spy. She loves discovering things, and doesn’t care much for the rules.

On the way to the school, they are ambushed by flywaymen, demanding the headmistress gives them a certain prototype. The headmistress, who is not really that, but an older student on a mission to get her finishing degree, is of no use, so it is up to Sophronia to save them. Of course, Monique tells her own story once they make it to the school safe, but she refuses to give the teachers the prototype. Sophronia witnesses more than she should have, which makes her only more curious, and determined to find the prototype Monique has hidden somewhere. She learns that one of her teachers is a werewolf, and another a vampire, and her teachers are not the ladies they appear to be.
The school itself is not a building, but a couple of enormous dirigibles tied together.
The classes not only teach the pupils how to run a household, the language of fans and lashes fluttering and flirting, but also how to make poisons, how to carry concealed weapons, how to spy. To her own surprise, Sophronia becomes interested in fashion, and somewhat ashamed over her own hand-me-down clothes. She has a great friend in Dimity and her brother Pillover (who is attending the school for evil geniuses).

Sophronia also gets an unexpected pet in a Mechanimal she picks up after the first attack, and as she has to feed it, decides to visit the steam room to fetch some coal. There she makes some good friends with the sooties, which also comes in handy from time to time. But whatever she does, she is still a lady.


I hope I did not spoil anything, I really loved this book, and am looking forward to the next instalment in this series. Gail Carriger has a very engaging writing style, she uses lots of new words, without explaining them very much, which I like. Sophronia and her friends are fun to get to know and I am very curious about what else they will learn.
I do think if you read the Parasol Protectorate books first, you have a big advantage of already knowing the strange (steampunk)words and some of the characters in this book.