The first book in the Feral Warriors series, published June 30, 2009.
Genre: paranormal romance
Cover: one naked man who can turn into a lion, what is not to like? The book cover itself is not so vague as this picture though … 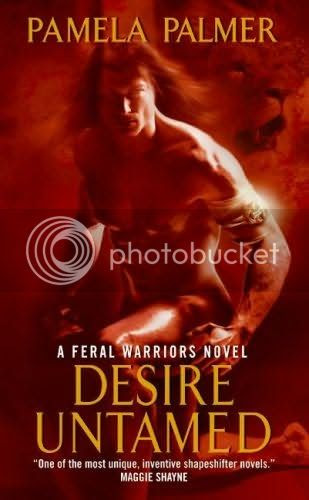 They are called Feral Warriors - an elite band of immortals who can change shape at will. Sworn to rid the world of evil, consumed by sorcery and seduction, their wild natures are primed for release . . .

Kara MacAllister's quiet small-town life is transformed forever the night a powerful stranger rips her from her home, claiming she is the chosen one - the key to his survival.
Spiriting her away into the rain-soaked night, Lyon reveals a truth Kara can barely credit. She's immortal, and the only one who can save his race. And deep within her, he arouses a fierce, primal hunger beyond anything she's ever imagined.
But only when their lives are threatened by an ancient evil will Kara and Lyon realize they have found a love they would risk their immortal souls to claim . . . and a powerful desire that could never, ever be tamed.


Kara MacAllister has been restless lately, living in the same small town for all her life, being a school teacher. Now she is also taking care of her mother, who is dying. So when she suddenly finds a big gorgeous man in her kitchen, she is pretty scared. And very sure that he is a lunatic, wanting to see the faint scarring on her breast, and claiming she is his Radiant! So when he just abducts her, she soon escapes him and races back home. Her mother needs her! And then to find her mother, lying on the lawn, apparently having witnessed her abduction, breaks her heart. This will surely kill her mother, how can she deal with that?
Lyon doesn’t want to let her escape, and follows her back, where he finds them on the lawn. Understanding the trouble he has caused, he helps Kara take her mother back inside, but he also tells her that this woman is not her mother, that Kara is not human but Therian. A race of virtually immortal shapeshifters. Her mother does manage to confirm that Kara is not her real daughter, and then she dies. Kara is heartbroken, and Lyon takes away some of the grief, so she can cope with it, and with the draden attack that follows.

It is not safe for Kara anymore, now that the draden have found her, and with her mother gone, there is nothing left for her here. No one who will miss her. Well, perhaps the little children she teaches. So she agrees to come with Lyon to meet her people. What she doesn’t know, is that he lives with 9 other men in a big mansion, and that he and his men are the Feral Warriors, the only ones left of their people who can still change into their animal. Only, they need Kara to feed them the energy from the earth so the magic to change will work. And being without a Radiant for so long, they are severely drained and dying.
Lyon also doesn’t tell her, that during the first ritual, her mate will be chosen for her, and that he will be necessary in the next rituals, or she will die. She has no choice in this, the goddess will choose. She wants it to be Lyon, as she is so attracted to him, the tiniest touch makes her hot. Kara doesn’t want anything to do with it all, she refuses to have sex with the man who is supposed to be her mate, she is scared of everything all the time, she just wants to go home.
The men have no patience with her, they don’t care for the fact that she is only learning about herself and her people, that she is raised human, with human morals.
They also have to deal with their enemies, the mages, and betrayal from within …

I did enjoy this book, the new world, the very different characters. The one thing I am really not a fan off, is the obligation to have sex to be able to work the magic. In my opinion, it is crude, and it rushes the relationship too fast along. Kara had no choice in any of this, and Lyon tried to be noble and give her up when another was chosen as her mate. But that made them both miserable. And no less attracted and drawn to each other.
I had been told some spoilers about this series, and I am very sorry that I did know some things already; I always prefer to get into a book unprepared. Luckily, I did not have the same problems with the story as my friend. It took a while for Kara to accept her fate, and go for it, but that is totally understandable for me. To be torn from your daily life and to get thrown in something so different is not easy, especially as you are not being treated very nice.

I am looking forward to reading more books in this series, and learning more about this world.