Jennifer Ashley – The pirate next door 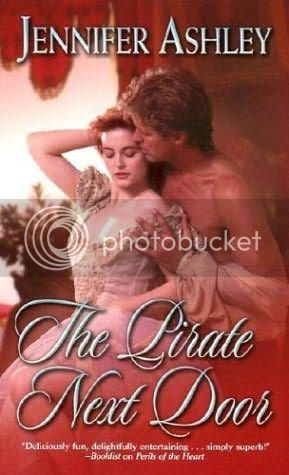 What was a proper English lady to do when a pirate moved next door? Add the newly titled viscount to her list of possible suitors? Take his wildly eccentric young daughter under her wing? Let the outlandish rogue kiss her with wild abandon?
As everyday etiquette offered no guidance, Alexandra Alastair simply set aside her tea, peeled off her gloves, and followed her instincts – whether that involved rescuing her new neighbour from hanging, fending off pirate hunters, plotting against aristocratic spies, or succumbing to a little passionate plundering. Forget propriety! No challenge was too great and no pleasure too wicked, for Grayson Finley promised the adventure of a lifetime.


Mrs Alexandra Alastair, granddaughter to a Duke, has been married before. Very unhappily, as her husband was notorious for his many mistresses and adventures outside the marriage bed. She lost her precious baby only a few hours after birth, and is still grieving for that loss. So now she is determined to marry again, and start a family of her own, with a good man. Someone who will really care for her, and not embarrass her. Together with her best friend, she has made a list of eligible bachelors, and has started to check them out.
But somehow, her new neighbour has her intrigued. Is he really a pirate as the rumors say? But surely, a Viscount with a daughter could never be a pirate? Even though he doesn’t dress conform the latest fashion, and receives odd visitors who could very well be pirates, he is so very handsome.

Then one warm evening, when the windows from her bedroom are opened, she hears a commotion next door; someone is trying to kill her neighbour! And the French King is missing? Alexandra doesn’t hesitate, gathers her big burly but young and very cowardly footman with her, and races to the rescue. And just in the nick of time she manages to save the Viscount from hanging himself. His enemy left him strung up, and he would have slowly suffocated himself that way, with his own servants incapacitated as well.

Grayson Finley really was a pirate before he became a Viscount, and he has an adorable little daughter named Maggie, who he didn’t know he had until a few months ago. He has made a bargain with the devil himself, so his little girl, whom he loved on first sight, could be brought up as a young lady should, respectable and with a large fortune behind her. Of course, he has no intention to honor the agreement and sacrifice himself, he wants to see her grow up. But his enemy is cunning and ruthless and not a little bit mad with grief and the need for revenge.

Alexandra has no idea she is getting in the middle of a fight between pirates, ending up a pawn between them. Her reputation is at stake here, she doesn’t want to become a mistress, she wants to be a wife, but her lover doesn’t seem to want to marry, and the men she doesn’t want, propose to her en masse. What is a lady to do?


I so enjoyed this story. It is so fluently written, and so easy to read, the pages just flew by. It is a light-hearted story, with characters I fell for at once, especially Alexandra, who keeps her head up no matter what happened to her. She is determined to choose a better husband this time, but all goes awry when she falls in love with the pirate next door. A man who shows her passion and freedom and joy. She also loves his little girl, and she longs for one herself.
Grayson Finley really was a pirate captain, and he acts as if he still is. It is his way of the highway, he takes whatever he wants, and won’t hear any arguments, or listen to reason. Nothing Alexandra says will sway him, but he does fall for her just as hard. He just has to get his affairs in order first. But to dally with her in the mean time, is just to his liking.

And he has to find the French King who has been kidnapped, so the Admiralty will give him and his crew a general pardon for their piratical sins.

I so enjoyed all the twists and turns in this novel, how the smart Alexandra figures it all out, and goes for what she wants, to safe the man she loves. There is also a romantic subplot with Alexandra’s former governess, who she wants for Maggie, and one of Grayson’s crew.
This book is just fun, it is different, it is very well written, and has some hot love scenes. I enjoyed the story and all the characters. And don’t worry, it is not a typical pirate book on the high seas, the closest to the Ocean this book gets is the mouth of the Thames.

The paperback edition is on longer for sale on Bookdepository.com, but the ebook which has been re-released earlier this year, is only 99 cents on Amazon at the moment:
http://www.amazon.com/Regency-Pirates-Pirate-Next-ebook/dp/B007QEBAPW/ref=sr_1_2?ie=UTF8&qid=1356367650&sr=8-2&keywords=jennifer+ashley+the+pirate+next+door