The first book in the Nightkeepers series, published June 3, 2008.
Genre: paranormal romance
Cover: like it 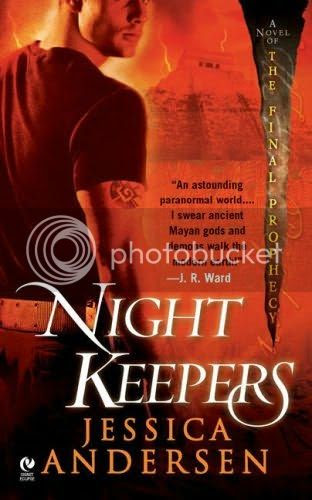 The end of time looms, and Mayan demons have surfaced from the underworld to trigger an apocalypse. But as the final day approaches, the descendants of ancient warrior-priests prepare to fight back…
As a Miami narcotics detective, Leah Daniels never knows how her day will turn out. But she certainly doesn’t expect to be strapped to a stone altar as the human sacrifice in an ancient Mayan ritual meant to coax a demon from the underworld – or to be saved by a handsome warrior-priest king who claims to recognize her from his visions...

Striking Jaguar thinks he is the last of the Nightkeeper warrior-priests, but as the end-time approaches, his mentor reveals there are twelve others. In reuniting them, Strike – king by birthright – gains the power to summon a Mayan god to combat the demons. But the woman of his visions is the gods’ chosen sacrifice. Now he must decide between love and duty … or find another way to invoke otherworldly magic in a death-defying race against the end of time.


I have had this series on my wishlist for a long time, and recently, I bought the first two books in this series secondhand. Well, I ordered the rest halfway through this book, which totally captivated me, and even gave me some nightmares. Yes, bloodsacrifices and such do not sit well with me. This book is all about the Mayan prophesy of December 21, 2012, when the world will cease to exist, so what better time to start reading it than a few weeks before that date. Will we be saved in time? And a better question: will I receive the books in time to read them before December 21?

Strike has grown up with the legends of the Nightkeepers and the Mayan culture, and the destiny that he has as son of the King, a destiny he cannot denounce. His father sacrificed the Nightkeepers in a bid to stop doomsday from ever coming, and he failed. Strike is the only one last of his race, except for an older and gloomy Nightkeeper called Red-Boar, and his Winikin (servant) Jox, who has raised him since the age of 9 after saving him and his sister Anna from the demons.
But now, with 4 years to go, the barrier is open again, and the demon worshippers have managed to get one through. It also freed the magic inside of them all, and the time has come for Strike to start getting serious about his destiny. To his surprise, he is not the last of his race, more children were rescued that day, the youngest ones who were not bound to the barrier yet, who had not yet undergone a ritual for their bloodline. To keep them safe, they have been kept in hiding, though the Winikin have made sure Jox knows they are safe, and how to contact them. And now that time has come.
Unfortunately, the woman Strike has been dreaming of, the woman he finally meets now his magic has come online, is not meant for him. She is only human, and he needs a Nightkeeper mate. Or so Jox and Red-Boar keep telling him. But why is he being drawn to her again and again? Why is he saving her life again, rescuing her from the makol again? What do they want her for?

While the trainees get to know each other, Strike dives into the archives, trying to find clues. How to safe Leah from her destiny as a sacrifice, and keep her with him as his mate, and how to defeat the prophecies and safe the earth?


This really was a book filled with action, and magic, and lots and lots of information. I enjoyed meeting all the main characters, and seeing their beginning. I felt for the struggle Strike has to deal with, he doesn’t want to become the king, to sacrifice his beloved one, and to lead strangers into battle, but he has no choice. It is his birthright, his legacy since the beginning of time. Leah was hurt by his distance, she wanted to be with him, but she also believed in the prophecies and the Nightwalker legends when told. And of course, meeting a god does that to a person.

What I did not like, was the blood sacrifice necessary to work the magic. Cutting your own hand or arm with a knife, or the most horrible one, putting a narwal spike into your tongue. Painful, horrible and very bloody. I really, really could live without those details. But the Mayans were a harsh race, who believed in sacrifices to their gods, so it does feel authentic. Still, it is a new time, time for new traditions and beliefs. A new way of doing things.

Yes, there are some hot love scenes, lots of magic, lots of history, and evil bad guys. Gods and demons and the end of the earth as we know it is looming. There is also humor, and normal people struggling to become more, to become mages and warriors and fight for the rest of us.

I am really looking forward to reading the rest of the series. I have already started reading the second book, Daywalkers. Featuring two other Nightwalkers who are not yet a couple.