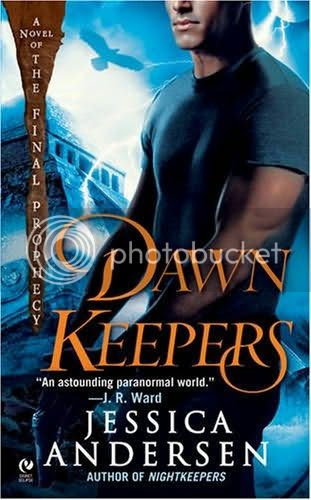 The countdown to the end of days has begun. According to ancient prophecy, on December 21, 2012, Mayan demons from the underworld will trigger an apocalypse. Only the Nightkeepers, mortal descendants of a race of magic-wielding warrior-priests can prevent the annihilation of all mankind.

Nate Blackhawk can’t help but resent the demands of his bloodline. Unlike his fellow Nightkeepers, he isn’t about to let the gods determine his destiny – especially when it comes to love. Which means he refuses to submit to the unquenchable desire he feels for Alexis Gray, the shockingly beautiful trainee who first appeared in his visions. But that’s easier said than done, considering that Nate needs Alexis’s help in uncovering the seven Mayan artifacts inscribed with clues on how to defeat the demons.
Alexis is willing to do whatever is necessary to prove herself as a Nightkeeper. She believes in the life she was born into and the future the gods have written for her – even when it comes to Nate, who seems intent on ignoring the intense passion between them. But as she and Nate test their powers in a race to recover the seven statuettes before the demons do, Alexis finds it impossible to deny her feelings fort he one man who’s destined to be hers.


Having defeated the demons in the first book in the series, the Nightkeepers face the next task: to retrieve the seven ancient Mayan artefacts with hidden clues to help them to counter the next prophecy. Lots of research is needed, and Nate is send after the first artefact. Unfortunately, he arrives to late. The statue is missing, and the woman willing to sell it to him, is dead. He doesn’t believe she died of natural causes, someone murdered her. And he swears revenge. But who knows what the Nightkeepers are after? Do they have other enemies?
Alexis is send after the second artefact at the same time, and she acquires it. But on her way home, a rogue mage almost manages to kill her. Only the timely arrival of Nate and Strike prevent her capture or death. It appears the Order of Xibalba is real after all, and still alive. Their goals are opposite of the Nightkeepers goals, and apparently their magic is way stronger and works differently. How are they to fight those new enemies?

In a bid to acquire a Godkeeper, the Nightkeepers hold a new ritual to offer Patience up. She is happily married already, and a Godkeeper needs a strong Nightkeeper to help her deal with the godlike powers. They are hoping for one of the other warrior gods to come down the skybridge to help them. To their surprise, it is Alexis who is chosen by the Goddess Ixchel , goddess of rainbows, fertility and weaving. How is that going to help them fight?
But what is done, is done, and perhaps the goddess can give them some advice on where to find the other artefacts. But Alexis doesn’t have a mate by her side, Nate refuses to be used by the gods. And he also doesn’t believe in love. Sure, the sex between them was mindblowing, but he intends to serve his 4 years, safe the world, and go back to his own life in Denver and his computer game company.

Alexis though was raised by her winikin Hannah to be a Nightkeeper, to be better and stronger, to be an advisor to the King, like her mother was. She grew up with the legends and the stories, and it is the life she wants. She wants to be important, to do what she can. And if Nate doesn’t want her, so be it. She will do it on her own, or choose another mate. But Nate doesn’t like that idea any better, and when Alexis sets her sights on Michael, he even fights the other man for her. He will accompany Alexis on her next mission, and if sex is demanded, so be it (the Mayan culture is big on blood sacrifice and sex to be able to use or gain magical powers).

But stubborn as Nate is, he will have to come to terms with his past, and his parents who died when he was a baby. Their cottage finally lures him in, and shares their past with him. Will he be able to embrace being a Blackhawk at last?

Anna has tried to repair her marriage, but it is not working. When she finds out who the other woman is, that is the last straw. Also, her student Lucius is acting more and more strange, not himself anymore. Is there still some demon inside of him? So when Desiree, Anna’s boss, sends him on a mission, he accepts, even though he knows he is betraying Anna. And when he finally finds her at the Nightkeepers compound, he feels even more betrayed. His whole mission is proving the Nightkeepers exist, and she is one of them? Why didn’t she tell him? Or course he would never have been able to keep that a secret, making an academic laughing stock out of the both of them.

There is also a big part for Rabbit in this book. He has turned 18, still has no marks of his own beside his bloodline mark, and is longing for more. He just doesn’t fit in with the rest of the Nightkeepers. And with his father dead (who neglected him for the most part) he is even more alone. So when he meets a young girl in Boston, and just knows she is someone important, he goes against his orders to find her. To rescue her from the Xibalba and do whatever is necessary to accomplish that.


Another action filled book, I loved the mythology, and everything that happens with the people I got to know in the first book. I really liked Alexis. She is strong, she knows what she wants, and she also finally decides she deserves more than a mate who doesn’t really want the real her. She is strong, even without him.
Alexis and Nate are often on the opposite site of things, with Alexis leaning towards traditions, while Nate lives in the modern time, and wants to do things differently. He values free will, and doesn’t want to believe in destiny, and that their paths are set out for them by the gods they worship as Nightkeepers.
But Nate slowly gets into things, when he finds out things about his parents, and that they did love him, and not just give him away (he ended up in the foster system when his winikin died soon after saving his tiny life).

Though this is the love story of Alexis and Nate, there is lot of page time for the other main characters as well, development of the story arc, and lots of magic and hot sex scenes. And danger.
I am very much looking forward to the next book.