The second book in the Youngbloods series, published July 8, 2012.
Genre: YA urban fantasy
Cover: I like her, he is spooky though. And those cats eyes are very important in this book. 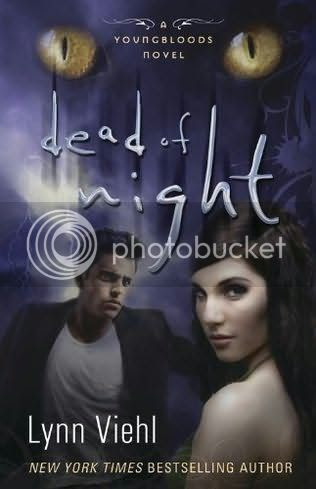 Catlyn Youngblood has a secret life. Despite being a natural-born vampire hunter like her two older brothers, Cat has fallen for Jesse - an ageless boy from a centuries-old vampire clan.
Cat's job cataloguing rare, mystical texts at a bookstore allows her to meet with Jesse alone every evening. But when girls who look disturbingly similar to Cat start disappearing from town, Cat and Jesse discover frightening clues to their whereabouts within the book collection. Together, they must stop a crazed man from realizing his dark scheme - one that would claim Cat's life.

WARNING: this review will spoil some important details from book 1, so read at your own risk.
Also: This book seamlessly continues where the first book in the series stops, so you really should read them in order.


Somehow, Cat starts her first day at school again, only it is two months later. And this time, it all goes a lot better than the first time, and she can actually enjoy it. Until she sees Jesse again, and suddenly remembers everything that has happened before. She is furious with her brothers for messing with her head, again, and with the whole town this time! Everyone has forgotten two months of their lives, the good and bad things that happened. So she will have to pretend to be happy carefree Cat and meet Jesse in secret again. Getting a holiday job at the local bookstore is perfect for that. A few hours of work, and a few hours of being together with Jesse. He shows her the secret tunnels beneath the village, where he has his workroom and safe place to hide when dawn catches him.
A little bit more freedom from her overprotective brothers.
But girls are disappearing from their town, girls who look a lot like Cat. Is someone looking for her? And then she meets a girl who escaped the brainwash, and still remembers everything that happened. Kari is totally willing to help them be together, and provide some cover up. Because Cat is determined to find those missing girls, and safe them. Even though her brothers want her to keep out of it, and be safe inside the house. Locked up in her room if necessary. Cat knows she can find them, she knows what she can do and how to protect herself. But she gives them the slip, and sets out with Jesse. And in the end, her bond with Jesse is the only thing that saves her from the old lunatic.

There is also a subplot with one of their horses, a pregnant Arabian mare, but I did not really understand the ending of that. Why or how everything was suddenly solved.


I really enjoyed this second book in the series as well, and blazed through it. It did not have all the errors the first book had. I still like Cat, she has no choice but to lie to and hide from her brothers, they would just wipe her memories again if they get the chance. But they finally tell her everything that happened, and explained their actions. It made sense, but did not make it right in my mind. Jesse is also a great character, never pushing their relationship, just accepting what time they can be together, and getting to know each other, and their families past. I liked him.
But her brothers, well, lets just say I am very glad not to have brothers myself, if they all act like that.

So the book ended kind of happy, and then a postcard arrived on the very last page, and now I totally need the third book! I want to find out what will happen!