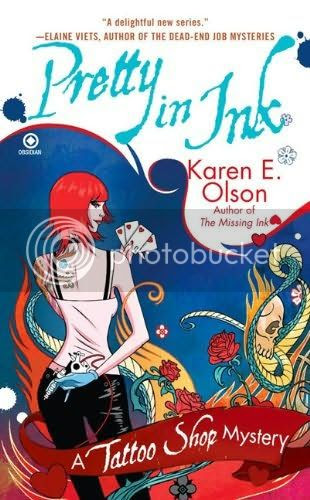 Brett Kavanaugh is a tattoo artist and owner of one of Vegas’s hottest tattoo shops, The Painted Lady. And in her spare time, she does some sleuthing – because nothing needles her more than murder.
After Brett and company ink Sin City’s newest drag queen stars, they’re invited to opening night at the Strip’s glamorous Nylons and Tattoos show. An evening of glitter and dancing ends in disaster when a stranger with a queen of harts tattoo fells Brittney Brassieres with a wayward champagne cork.
Even though Britney recovers, she mysteriously dies soon after, and then another drag queen is found poisoned. Someone’s targeting Vegas’s fabulous femmes. And sharp as a needle Brett must crack the case before the show’s over for good.


Where to start with this review? It was action filled from the first page till the last. Brett has been inking some drag star queens lately, for their new show, and now she and her colleagues are invited to opening night at Chez Tango, owned by MissTique. Brett is enjoying herself, which she had not expected, but those drag queens are very good at their job, and look fantastic.
But then some lunatic points a bottle of champagne at Britney Brassieres, who is singing on stage, and makes the cork slam straight into Britney’s chest, knocking her over. The sound of the cork popping, and the sight of the singer falling over, makes people suspect the worst, and a stampede starts for the door. Which does ruin opening night. Brett never got a good look at the guy, as he sprayed her with the champagne as well, getting it into her eyes, but she did see the tattoo on his arm, a Queen of Hearts playing card. But well, this is Vegas.
When the cops and the paramedics come in, Britney aka Trevor McKay is taken to the hospital, as he has hit his head pretty hard on the stage. Charlotte, Brett’s intern, is going with him to keep him company. To Brett’s disappointment, it is not her brother Detective Tim Kavanaugh who heads the investigation, but some other cop who seems to really dislike her, and doesn’t even give her his name.
The next morning that same cop arrives at their door (Tim and Brett are living together) and their clearly is some bad history between the two of them. Detective Frank DeBurra is dating Tim’s old girlfriend, the one who left him when he did not propose to her when she expected it. And Frank clearly resents that. But DeBurra works not for LVPD, but for Metro Homeland Security, so there must be more to this case than meets the eye.

The next morning, Trevor is released from the hospital, but Charlotte is missing. And things get worse after that, fast. Trevor gets sick in The Painted Lady, and dies shortly after in the hospital. Charlotte is wanted by the police, for something that happened in a pawn shop, involving a tacky pin owned by Trevor. Charlotte and Ace are apparently dating, and Brett never noticed it, and Ace is protecting Charlotte. But Brett needs to get to the bottom of all this, as Frank DeBurra is harassing her.


I won’t spoil everything that happens in the book, I never ever could have foreseen all those twists in the plot, and the strange happenings. And the strangest part is perhaps that Brett’s main competitor, Jeff, is helping her out when he can. Does he have his eye on her?

I enjoyed this second book in the series a lot, it kept me on the edge of my seat, and really makes me want to visit Vegas once in my life. See a drag queen show in a club, gamble a bit, and tour all the major casino’s.
I enjoyed catching up on Brett and all the other characters, and am looking forward to the next book. Karen E. Olson has written a fast paced cozy mystery, with unique characters and lots of action. There is of course also room for humor, and friendship. Romance, not so much, as Brett is not very lucky in that department. I keep being tempted to get a tattoo myself, but know I never will have enough courage for that.